What is perfect happiness? That everything is good
What is your biggest fear? That nothing is good
With which historical figure do you identify yourself most? With Ida Vos
Which trait of other people’s character do you think the most annoying? Formal behavior
Which temptation you can’t resist? I’m in love with every woman
Which is your favorite vacation? Travelling through the USA for a year
With which part of your appearance are you less satisfied? With my bald crown
Which living person do you despise? The one that wrote my last speeding ticket
What do you regret most? That my parents never met my child
When and where was your happiest moment? Happiness and misfortune go hand in hand: major and minor form a harmonious entirety. It’s more than time and place
What is your present state of mind? Nicely stressed
You may change one thing about yourself. What would that be? I would like to be somebody with enough money
What is your greatest achievement? Creativity
What is your dearest property? My family and my violin bow
What is the lowest point of misery? To play a football match and the center spot is a hole that ends in Australia
Where would you like to live? In the Vondelkerkstraat 12 in Amsterdam
What is typically you? I talk and think much. Most of the time I laugh and sometimes I cry
Which quality do you appreciate most in a man? That he listens to women
Which quality do you appreciate most in a woman? That she listens to men.
Who are your favorite authors? Judith Herzberg and Willem Wilmink
Who are your favorite composers? Beethoven, Bach, Pugliese, Piazzolla and Kraayenhof
Who are your heroes? Jaap and Nel de Lange, the couple that helped my parents to hide during the war
What is your motto? He who saves one life, saves the whole world
[/accordion_item] 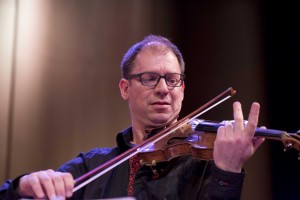 Bert Vos started to play the violin when he was only seven years old. At the age of 16 he became Concert Master of the Haags Instrumentaal Jeugdensemble. Two years later he went to the Conservatorium of Rotterdam to study under Jan Hulst. In 1993 Bert arrived, as the only Dutch musician, at the International Youth Orchestra in Israel, under the leadership of the maestro Lorin Maazel. He also followed several master classes, in Stuttgart and New York, among others. After receiving his diploma as music teacher he followed the course for stage performer at the Rubin Academy in Tel Aviv. He has also been a member of the Gertler String Quartet. Once he returned to The Netherlands Bert became a violinist at the Escher Ensemble and a regular replacement musician at the Het Gelders Orkest. Bert has is also the founder and bandleader of the klezmer band Shtetl Band Amsterdam. Recently he has also joined the ensemble Novaya Shira, from the singer Shura Lipovsky. Since the begin of 2005 Bert has been a member of the Sexteto Canyengue and the Kraayenhof Tango Ensemble, at first as second violin and currently (since 2012) as first violin.