What is perfect happiness? Sailing before the wind
What is your biggest fear? That something bad happens to my children
With which historic figure do you identify yourself most? Michelangelo
Which trait of your character do you think the most annoying? Laziness
Which trait of other people’s character do you think the most annoying? Arrogance
Which temptation can’t you resist? A cold beer after a concert
What is your favorite vacation? Sailing to the Caribbean
With which part of your appearance are you the least satisfied? Back
Which living person do you despise? Al Baghdadi
What do you regret most of all? –
When and where was your happiest moment? The birth of my two daughters
What is your present state of mind? Happy
You may change one thing of yourself. What would that be? Assertiveness
What is your biggest achievement? My musical career
What is your dearest possession? My family
What is the deepest point of misery? Not being healthy
Where would you like to live? Italy
What is typically you? Quiet
Which quality do you appreciate most in a man? Reliability
Which quality do you appreciate most in a woman? Warmth
Who are your favorite authors? Reve, Knausgaard, Elsschot
Who are your favorite composers? Bach, Stravinsky, Piazzolla
Who are your heroes? Marco van Basten, Roger Federer, Nelson Mandela
What is your motto? Enjoy the day! 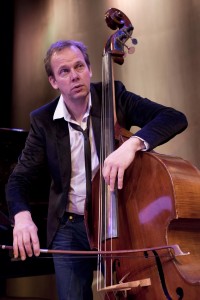 Jaap Branderhorst has studied contra bass and guitar at the Sweelinck Conservatorium in Amsterdam. After his studies he has played in almost every symphonic orchestras in The Netherlands. One of them was the Koninklijk Concertgebouw Orkest, which provided the possibilities of travelling and playing around the world. Jaap has also played in a number of modern music ensembles, such as ASKO- Schönberg Ensemble, the Nieuw Ensemble and the Xenakis Ensemble. Next to that he was the bassist for the Escher Ensemble for many years. He has also taken part on contemporary music. Together with friends he has founded the Petit Orchestre Orange, a band which is specialized on Jazz from the 20’s.

Since 2005 Jaap is the bassist of the Sexteto Canyengue and the Kraayenhof Tango Ensemble and one of the long-term members of both bands.