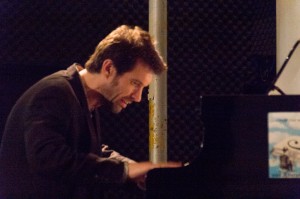 Juan Pablo Dobal, pianist, composer, born in Buenos Aires, Argentina on 1964. Started to play the piano by ear when he was 5 years old, at the age of 9 he started his piano studies. His first teacher was Blanca Barquín, and later on he received lessons from Antonio de Raco. When he reached 15 years old he started to give classical concerts. He received his first diploma as a piano teacher at the age of 17 and won the first prize at the “Conservatorio de Música de Buenos Aires Alberto Williams”. He graduated as a music teacher at the “Conservatorio Nacional de Música C. L. Buchardo” when he was 22 years old. Next to his classical studies he has always been involved on other music popular and improvised styles, such as Folklore, Tango, Jazz and Latin American music in general. One year later he received two scholarships for jazz courses (the first one from the “Berklee College of Music” in Boston, and the second one from “Seminario del Valle de las Leñas” in Mendoza). Juan Pablo has also taken several lessons with great teachers, such as Laura Baade, Rodolfo Daluisio, Pedro Aguilar en Manolo Juárez.

When he turned 25 he moved to Amsterdam, playing in 1989 in the quartet “Viento del Sur” where Carel Kraayenhof was also a member.

In 2008 his solo album “Loco Corazón” came out in Argentina. He has also toured The Netherlands with his own theater show. Since the end of 2010 he is the pianist on the duo with Carel Kraayenhof, the Sexteto Canyengue and the Kraayenhof Tango Ensemble.