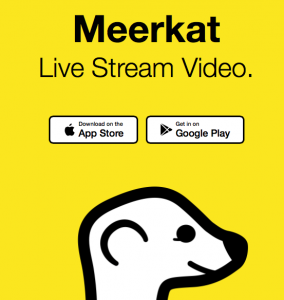 Carel Kraayenhof can now be followed via Meerkat

As of now Carel Kraayenhof is also on Meerkat. What this is and for whom it is meant is described in a summary we found on the internet.

By: Casper Paans on Wednesday 18 March 2015 on 12:00.
‘You should have been there’, is a statement you often hear, but it seldom was so easy to realize that ‘should have’ as with the new app Meerkat. During the first week the app was already downloaded 28000 times and that number keeps rising. But what can you do with Meerkat? And why is it so incredibly popular? Meerkat is a new social medium that from one day to another had hundreds of thousands of downloads. From where does this app come so suddenly? And what makes the live-stream-app so popular?
What is Meerkat?
With Meerkat you can film live at any time. That can be while you are cooking or while playing the newest GTA-game, but lately the app is more often used for live-events. When you start a live-event, it appears on Twitter. Other twitterers can see your stream and react. Very handy to quickly share information. If they like your report they can choose to be informed whenever you make another video.
Restrictions
Meerkat has been developed by the 27 years old programmer, Ben Rubin. He got a plan to share live-images with friends via a special app.
Popular
The idea to stream live videos is not new. It is also possible via other apps and sites like Ustream. And even Youtube can live-stream events. What makes Meerkat so popular then?
Very simple
It is particularly the ease you start a livestream with. Everybody can start a stream directly from his smartphone on every moment of the day. It demands a few pushes on the button – the whole process takes half a minute at most. That is quite different from most livestreams you see at Youtube at this moment. For these often cameras are still installed standing on a fixed point and the streams are often still managed by professional companies.
For everybody
Meerkat wants that the user can simply film on the street
Set back
Yet the app had to deal already with a few set backs. Namely Twitter tried to prevent the app by blocking the access to it. At the start there was the possibility to watch the streams directly via Twitter, but that is no longer possible. The stream has to be opened now in the app, an extra obstacle for the user.
Instagram-quarrel
That sounds familiar. Twitter did the same before with Instagram. Earlier one could examine an Instagram-photo completely via Twitter, but now it is only possible via a link. The same thing now happens with Meerkat.