But at the moment all is fine with him.
After last week’s concert on May 5th at the Muziekgebouw aan ’t IJ Carel did not feel well and on the 6th of May he started feeling a lot of pain and cramps in his stomach. The pain was so strong that he actually fell sick. Four hours later the pain was just as strong. Finally Thirza took him to the emergency room of the Waterland hospital in Purmerend. He remained in the hospital overnight for observation. On the 7th of May they did an ultrasound of his stomach and found gallstones. On the 8th of May the doctors decided to perform an emergency operation in order to avoid acute biliary colic. The gallbladder had a serious inflammation and two very large stones were found, all was removed. Carel is currently home, very tired but resting. Even though he is still in a lot of pain, but we are positive that he will recover soon.
We are very sorry that due to this situation the Carel Kraayenhof Ensemble had to cancel a concert last weekend in Klingenthal (Germany). 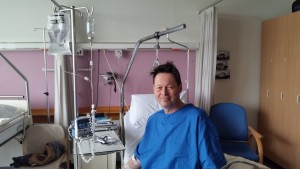