Press release
Lavinia Meijer & Carel Kraayenhof release a live CD
On the past few years harpist Lavinia Meijer and bandoneón player Carel Kraayenhof have met several times on festivals and concerts. On the stairs of the artist café at Carré Amsterdam the idea popped out: ‘Let’s sit together, play a bit and see if we can come up with a concert repertoire.’ The concerts that quickly followed that idea were a great success and most of them sold out. Thus the idea of recording a live album together. “In Concert”, was recorded on the 7th and 9th of September of this year at Tivoli Vredenburg (NL) and will be available in stores on October 9th! 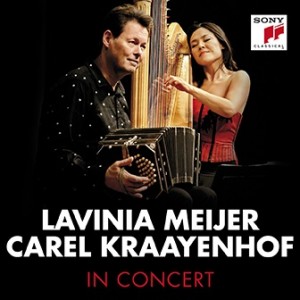 The choice for a live recording was certain one. Both musicians were filled with the warmth of the audience. Those moments can only be registered with a live recording. In one of the songs a mistake was made. This “mistake” sounds actually better than the notes which were on the paper, so we decided to keep it, and it sounds like it was meant to be.

The repertoire consists of milongas, tangos and other beautiful Argentinean, Spanish and Italian compositions from Piazzolla, Bacalov and Morriconne (among others) and three compositions from Carel Kraayenhof himself; one of them is the tribute to his three legged cat ‘Witneus’. Lavinia Meijer makes het debut as composer with het tribute to her niece, who was borne last year, Hello Stranger.
In total the album consists of 15 compositions, one of which is an impressive interpretation of Piazzolla’s three piece Historie du Tango. The already warm sounds from the harp and the bandoneón complete and strengthen each other in this beautiful, passionate repertoire. Kraayenhof and Meijer have made special arrangements to pretty much every piece because for this unique combination of instruments there are no already written compositions.
The photos for the album were taken by ‘Zilveren Camera’ winner, Peter van Breukelen. The author Abdelkader Benali wrote a poetic story line about music, longing and coming home.
On the next months Meijer and Kraayenhof will perform this repertoire is several locations. Most concerts are sold out. For the complete agenda please visit:
www.carelkraayenhof.com
management: Thirza Lourens 0299.690821, management@carelkraayenhof.nl
www.laviniameijer.com
management: Eric van ’t Groenewout 06.24862308, eric@tripleconcerts.nl