As the end of the year approaches we, as well as many of you, look back at what has happened during this past year and look forward to the near future.

In 2013 there were many important moments, such as:

– The premiere of Carel’s composition ‘Compassion’, with the Residentie Orkest

– Two beautiful concerts in Seoul, from Carel and the Absolute Ensemble, strengthen by KTE’s musician Bert and Jaap.

– SC’s concert during a tango salon in Edinburgh

– SC’s concert also during a tango salon in Las Palmas

– A concert from Carel together with JURK!

– A great tour with KTE through the Dutch Antilles

– The death of the icon of reconciliation and liberation, Nelson Mandela

The future? Nothing at this moment is sure, but we do have several dreams. We dream that the Kraayenhof Tango Ensemble, under the direction of Jos Groenier and with video material of Joost Gulien, can manage to gather enough funds through subsidies and sponsors to make real our beautiful new theatre show ‘Liberación’, which shall premier in January 2015.

We dream about our family and friends, as well as yours, that they may enjoy good health.

We dream about sharing our music with as many people as we possibly can.

Last November Carel was invited by the ‘Foundation for the preservation of The Nachtegaal grain windmill’ to give two speeches about ‘Dreams’. This Foundation has gathered money for the restoration the old grain windmill, which is located just across from us in the Beemster.

“Our lives are marked by the place where we live, the smell of the soil in our polders, the fresh air we breathe, the soft rain in the summer and the deep cold in the winter.

And we feel the history of the Beemster running through our veins, surrounded by its streets, trees and ditches. The towers of the church look down on us with patience, and luckily there is now one windmill (from the 43 original ones) which reminds us of the beautiful dream of the 17th century that is now reality.

Just like the dream of many Dutch people, who together built and strengthened dikes, built windmills and drained the Bamestra lake, is the rebuilding of The Nachtegaal the heart warming result of the dream of many ‘Beemsterlingen’ who joined forces to make it come true.

What touches me personally is how all the individual dreams became one collective dream and how these dreamers joined forces and managed to pass on one of our most precious traditions as a beautiful present to future generations.

These lines are very similar with music. Musicians also dream about sharing the songs that fill their hearts and have been thought  by their teachers with the people around them and to pass them on to the new generation of musicians.

My musical dream started when I was 8 years old and had my first piano lesson…….

A school friend of mine had to study piano every day for half an hour and I used to go to his house very often to listen to him and then I also wanted to have piano lessons. A friend of my parents sold them his old piano for 150 guilders.

My brother Jaap had already started with guitar lessons and as he practiced I used to see tears running down his face from the difficult barré grips which he was learning, as they were very painful for his tiny left hand.

And still he went on, and that made a huge impression on me.

One of my classmates was the singer and guitar player of the popular school band, who played in the auditorium during the school parties. During these school evening events I used to play ragtime on the piano.

To study jazz or world music in a conservatory was not possible back then, and a carrier in classical music didn’t attract me at all.

But the music kept calling me. 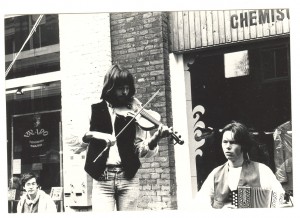 My brother, who was also studying in Amsterdam, eventually found through his passion for the Beatles a revival of the English, Scottish and Irish folk music.

Next to guitar he started to play fiddle and mandolin. He pushed me into buying a diatonic button accordion (melodeon) and later a concertina, a hexagonal bellows instrument. Through many twists and turns I came across the bandoneón and together with that to the Argentine tango.

A new dream was born. When I heard that instrument for the first time, it was just like a lightning went through my body. I felt the need to travel to Argentina and started to learn Spanish. Every dream that I said aloud became reality and the breeding place for that was the Vondelpark in Amsterdam.

There I met an Argentinean while I was playing the accordion. He asked me: ‘Do you know the bandoneón, the heart and soul of Buenos Aires? I am going there in December. I will try to bring back one for you. Not only he brought back a bandoneón, but also a stack of tango LP’s, which I started to write down note by note. Soon after I started, together with Juan Tajes, the group Tango Cuatro, with which we started to play nationally and internationally.

But there in the Vondelpark I also met a fantastic woman from the Beemster, who later became not only my wife but also my manager!

In 1987 I met Astor Piazzolla, tango nuevo’s father and composer of Adios Nonino. He took me to New York and there I was, to my pleasant surprise, playing 8 concerts per week, which we started with Adios Nonino.

And so, dream after dream came true: in 1989 I met Osvaldo Pugliese, a charismatic and beloved tango maestro, who was already past his 80 years of age.

I composed my first tango, Clavel Rojo, for him while dreaming about the first meeting with my idol.

He became my Godfather in Buenos Aires and invited my sextet to tour with his orchestra in 1990.

Slowly it became clear to me that here in The Netherlands we are used to hold our dreams in for ourselves, while the Argentinean people actually share and treasure their dreams among each other.

This became the guiding line in my life.

Dare to dream aloud and your dream will come true! This, because others will then comprehend your dreams and identify themselves with them.

This happened at first with my dream of making music together with other musicians. I was able to share this dream with admirable artists such as Sting, Ennio Morricone, Janine Jansen, Yo-Yo Ma and many others.

But, behind another door there was a dream of passing music on.

This is why in 1993 I started the Course Argentine Tango at the Rotterdam Conservatory and together we started the student orchestra OTRA. An even prettier dream which Thirza and I have fulfilled was to assist Argentinean musicians and music schools. For that we held a benefit concert in the Middenbeemster’s church in 2002 which assisted the Avelleneda music school in Buenos Aires. In that same year I was asked to play at the wedding of Willem Alexander en Máxima, who are nowadays our king and queen.

That was also a dream, which started at the barbershop in Middenbeemster. In the newspaper I read that Willem Alexander had an Argentine girlfriend. At that moment I said to the barber: ‘How great would it be if she actually likes tango and I was able to play for her!’ The rest is history.

Since that beautiful day in 2002 I have travelled the world and met many people who have musical dreams.

Our newest project is the bandoneon project for Jujuy.

Jujuy is the poorest province in Argentina and the people there have simply no money for musical instruments.

The only bandoneón player who is left there, Daniel Vedia, tries to keep this culture alive and his students play on carton boxes glued together in the shape of a bandoneón, solely because there are no real instruments to be played on. They tick on the sides of the boxes and sing along to the keys.

Since we met Daniel, Thirza and I, have tried to gather money for bandoneons. We have managed to gather a considerable amount thanks to a tango-dancing club from Engelen (Den Bosch) and through a benefit concert in that city.

A few weekends ago I met a special dreamer: the bandoneón restorer and tuner Oscar Fischer from Buenos Aires.

Regardless of all obstacles he managed to build with his own hands a brand new bandoneón. The first Argentinean bandoneón. He contributes to the Jujuy project by repairing and tuning bandoneons and he will build another bandoneón and donate it to the young students of Jujuy.

The people of the Beemster have also donated for this project, for this we are very thankful.

The best part of dreaming for charity is that by making a donation you are not only giving a beautiful gift to someone else but you are also enriching yourself, which is the greatest gift of all.

And with this feeling, together we look at our beautiful Beemster windmill.

I wish you good luck with your future dreams!