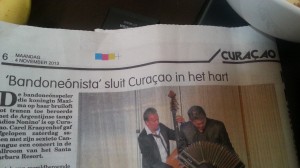 ‘Bandoneonist’ strikes Curaçao in the heart

The bandoneón player who brought queen Maxima to emotional tears during her wedding with the Argentine tango ‘Adiós Nonino’ is in Curaçao. Carel Kraayenhof gave a concert last Saturday together with his Sexteto Canyengue at the ballroom of the Santa Barbara Resort.

Songs from internationally known composers such as Astor Piazzolla, Carlos Gardel and Alex North were played as well as own compositions from Kraayenhof and from his piano player, Juan Pablo Dobal. A total of seventeen musical pieces were ‘served’ to the audience in a mix of different influences, origins and time periods. An abundance of music styles and moments in time were presented where, certainly, the Argentine tango was the highlight. Kraayenhof explained the origins of the bandoneón and its functionality. During the Second World War period most of the bandoneóns were ruined by the Nazi-Germans, but some made it by boat to Argentina where the instrument was ‘reborn’ and grew to be a national pride. “This is not an accordion. An accordion has chords, that is not how this instrument works. Here, both sides of the instrument must be played, and that is quite difficult. Honestly either you have to be totally drunk or extremely sober to be able to play the bandoneón… in which state I am in right now I am not going to tell you”, joked Kraayenhof. He also spoke about the well-known composer Gardel, who passed away in 1935 in a plane crash. Gardel played in Curaçao just before his accident. Gardel also discovered Piazolla, who was back then still too young and was not allowed by his father to tour with Gardel. “If he had indeed joined Gardel on tour, I would have never met Piazolla”. The bandoneón player patched more Curaçao and our local culture in his program by mentioning Tula’s history and by playing a piece of the Aruban composer Rufo Wever. A highlight of emotions was during in the encore, when the Sexteto Canyengue played a beautiful version of ‘Atardi Korsou ta Bunita’. Many in the audience allowed the words of this song escape through their lips. With this tribute to one of our local anthems the Dutch bandoneón player stroke our hearts and was embraced by the audience. Last weekend’s concert in Curaçao was organized by Curaçaoan Kunstkring (cultural group) together with the Cultural Comité Fortkerk. Several sponsors played part on this event, including the Prins Bernhard Cultuurfonds Caribbean Region.

Today a free school concert will take place and tonight Kraayenhof will play once again, this time at the Governor’s House in Punda. Tickets are still available at Mensing’s caminada.