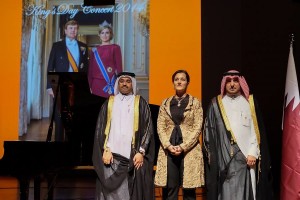 With two sponsored KLM-tickets Carel and I flew to Doha on 28 April. Juan Pablo and Rimmert followed us in a flight by Qatar Airlines. We travelled on invitation of the Dutch ambassador in Doha, Yvette van Eechoud, to celebrate ‘Kings Day’ there on 29 April in the National Theatre together with The Dutch community.
When you arrive on the airport it is immediately clear that you landed in a totally different world. It is a country where the smell of Musk overwhelms and fascinates you completely, where most men walk in a thob with gutra, a white robe with a white headscarf, and many women in a niqaab, a black robe under which the eyes are still visible.
Qatar is a country, that is lead by one family, the Al Thani family and where the local population is a minority (200.000 Qatari, 2 millions of foreigners). The heat in June, July and August is so extremely high that for us it was immediately incomprehensible why the Fifa has planned the World Championships to take place there in summer!!
Most of the Qatari are sunni muslims, all the other inhabitants are foreigners who do most of the work and took their own religions and traditions. In this special country we were going to give a concert.
That concert took place in the National Theatre in Doha. It is not very known by the ‘common’ Qatari, but it does have all the facilities of a theatre in a middle sized Dutch city. Unfortunately for Rimmert his sound-table was placed at the utmost left side of the hall, because in the middle, where it is normally situated, stood the unmovable chair of the emir. Fortunately Rimmert dealt with bigger problems and he mixed the sound perfectly. For Juan Pablo it was a feast to drink in the artists foyer, which very much looked like a Bedouin tent, the Arabian coffee with five (!) lumbs of sugar. Strange people those Argentinians!
From the Dutch community 400 people had come to the with orange flowers decorated theatre to attend the alcoolfree reception and to listen to our concert. Our ambassador received many CEO’s of Dutch companies in Qatar, she also welcomed minister Mohamed Bin Saleh Al Sada, the minister for Energy and Industry, and also ambassador Ibrahim Fakhroo, head Protocol of the Foreign Office.
The ambassador opened her speech in Arabic, followed by a beautiful text in English, in which she explained that music unifies peoples and cultures.
As soon as both the national hymns were finished the concert of Carel and Juan Pablo started. For an hour the audience listened breathlessly to these musicians, to finish after the encore, with a hit: the presentation of the song ‘Aan de Amsterdamse grachten’, sang by our ambassador.

The next day it was Carel who performed solo in ‘Jazz at Lincoln
Center Doha’, in one of the towers of the famous St Regis Hotel. This Jazz Club, with the head-office in Lincoln Center in New York, presents a free admissable concert every evening. The owner of St Regis and the Jazz Club is Omar Al Fardan, who also was present this evening. The performance was so successful that Carel was invited to return at the end of this year as Artist in Residence for possibly two weeks.

The next day we attended a beautiful concert of the Qatar Philharmonic Orchestra. At the end we met Kurt Meister, the artistic leader of this orchestra.
Perhaps maybe in the future can be listened in Qatar to Carel’s ‘Suite Compasion’…..