Our album ‘Liberación’ is nominated for an Edison World (the Dutch Grammy)!
We are over the moon with happiness and very proud that particularly this CD, which was recorded at the Beauforthuis in Austerlitz (NL) under our own label, through crowdfunding and private savings, was nominated by the jury of the Edison Foundation. 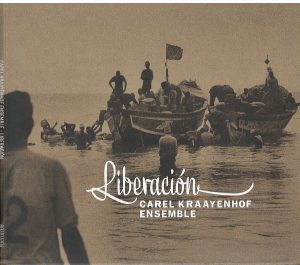 On this CD, of which the release took place in November 2014, are as many as ten original compositions, nine of Carel Kraayenhof and one of Juan Pablo Dobal. The CD was recorded with the musicians of the ‘Carel Kraayenhof Ensemble’: Juan Pablo Dobal, Bert Vos, Iefke Wang, Jaap Branderhorst and Jan Willem Troost.
At the end of May the winner of the Edison World 2016 will be announced.

This nomination feels to us as a recognition of our work, trying once again to prove that world music is music about people, music that concerns people.
World music has made a significant contribution to the civilization and history of the world and humanity. Also this CD is dedicated to all people who are looking for “freedom” and “liberation”.
Off the coast of ‘Lampedusa‘ (composition CK) refugees seeking a safe haven drowned already back in 2013. In this composition you hear the waves crashing on the rocks, you hear the ferocious waves lifting the small boats and slamming them down into the deep black cold water…
“Aleppo” (composition CK), the beautiful city in Syria, where in the year 2016 no one knows who actually is the enemy, completely destroyed. In this composition you experience the warmth and hospitality of the Syrian people, the tenderness with which they shape life, but also the melancholy of a vanished era.
Gently Juan Pablo Dobal leads us with his magic composition ‘Andes’ to the liberation of our soul. It’s as if he invites you in this composition to soften your heart and open it to life.
You don’t have the CD yet at home?
Order it now in our webshop.