Hello Abel,
From my email-address the reaction of Mathilde Tiessen on the concert of Carel Kraayenhof in the Noorderchurch. For this concert she got two free tickets. When you read it you will understand how much we enjoyed. Good luck with your programme. We are regular listeners.
Greetings,
Mathilde T and Henk V.

We were chosen to be present for free at the Saturday-afternoon-concert of Carel Kraayenhof and Juan Pablo Dobal in the Noorderchurch in Amsterdam, 6 February 2016.
During this sparkling and heartwarming concert the first copy was presented of their new cd: ‘Tango Hotel Victoria’.
It was a top performance: 5 stars, craftmanship, cheerfulness, class, relaxed and heartwarming!
The cd is named after the first number, a tango: ‘Hotel Victoria’ from 1906, but it also refers to the hundreds of hotelrooms occupied and slept in every year by Carel and his musicians. Because of the scenery you really imagined to be in a hotelroom with bed and bedspread in which sitting on the bed, nicely chatting, table, cupboard, cuddly cat (Piazzolla was called ‘The Cat’) an intimate atmosphere was created. With every number appeared enlisted the one to whom the special number was dedicated.
1 Tango Victoria: picture of an Argentinian hotel. Sparkling beginning with fast high tones and after that the familiar tango-sounds and later cheerful and sparkling again. The beginning was set! The atmosphere at once relaxed and full of attention, because after this first number the new cd was handed over by Anita Verheggen, the lady who looks after the rights and concerns of musicians. Gratefulness.
For years and years Carel and his friends travelled and collected folk-music/folklore in Argentina and neighbouring countries. So lots of inspiration to compose themselves and then starts the list dedicated to:
2 Enny, written on the occasion of the eightiest birthday of his mother (present); a waltz with an incredibly nice interaction between bandoneon and oiano. No question, there is a loving mother-son relation. 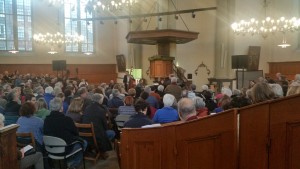 3 Nata Blanca or ‘Whitenose’: picture of Carel’s cat, dedicated to his three-legged cat who bumps in three-four time through the high grass of the Beemster. Music as if you see all its movements (and hesitation) and it can only be a happy cat. Dedicated to his brother Jaap who is a cat-lover.
4 The fourth number is a Milonga (melody) in the ‘most African rhythm of Argentina’ tells Juan Pablo: the Chacarera. Mixture of African, Spanish/Porugese and native rhythm.
5/6 The pianist plays solo two own compositions. The first calm and melancholic as if you see prospects; inspired by NE Argentina. The second one inspired on a region bordering on Chili, the whine-region, and yes: it is an infectious story as if somebody is coming home; that it was alright there and the wine tasted delicious! And there are so many things to tell!
7 In music-piece numer 7 Kraayenhof plays solo; a waltz-ballad called ‘Charlotte’. It is dedicated to his beloved sister in law ….. Charlotte. An ode to her because she dedicated herself to wheelchair-friendly dwellings in Groningen. It is a simple and lovely story from which you can conclude again: ‘That relation is OK’!
8 The pianist with a virtuoso rhythmic piece; again a Chacarera.
9 ‘Beautiful lunatic’, Loco Lindo is the melodious based on folklore-music story of a man who makes a hole in the floor of a museum to be able to look at the art-treasures without a ticket. A self-portrait of expressive artist Maurizio Cattelan (photo). Bandoneon and piano with unexpected turns and humour!
10 After a waltz on which you (the public) would like to dance the double-bassplayer joins and the three of them play Opera 79.
11 Not an opera…no, it is the address where Arjan and Marianne live, the people of Tango-salon Plantage Muidergracht. And yes! There is live-dancing now by a topclass-amateur-duo out of the audience!
Then a violin-player joins and a tribute is payed to a 90 years old lady-friend who as a girl survived the concentration-camp together with her mother and who after that devoted herself her whole life to ‘Worldpeace’.
12 Frieda’s Milonga…… so charming, so mature…….
As prelude of the sparkling finish a carnivalesk, cheerful, active and challenging number is played; bandoneon, doublebass, piano…. 13
14 And then an extra percussionist arrives. Enrique Firpi. Back to back with pianist Dobal. Together they play an Uruguayan rhythm the ‘Candombe’; a foolish, contra each other going rhythm. Music expressing the wish that slavery may be over some time. Something like: ‘We are unique, we are so characteristic, we are and are allowed to be ourselves!’
And as an encore: what do you think? Of course Adios Nonino….. the song that meant the breakthrough of Carel Kraayenhof, played at the wedding of Willem Alexander and Maxima in 2002. Only, played still more exclusive, more lived through, more varied, together with bassplayer Jaap Branderhorst and violinist Bert Vos. But the toppers of this unique, beautiful afternoon were Carel Kraayenhof with his bandoneon and Juan Pablo Dobal on piano!
Seldom heard such a varied, relaxed and masterly concert. Warm because of the odes played for friends and family and warm because of the friendship between the musicians!
We are glad that we were the lucky ones!
Thank you Abel, thank you RTVNH.
Mathilde T and Henk V.