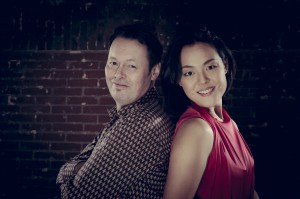 Carel Kraayenhof as well as Lavinia Meijer are known around the world as musicians who are masters of their instruments. Both have reached large audiences far beyond the borders of their country with instruments that are not commonly seen; the bandoneón and the harp, respectively. Another common factor between these two musicians: they do not allow themselves to be “one more in the crowd”. Kraayenhof has worked with musicians such as Sting, Ennio Morricone, Yo-Yo Ma, Joshua Bell, JURK!, Caro Emerald and the 3JS. Lavinia has been seen frequently on stages on the past months with the Amsterdam Sinfonietta, Holland Symfonia, Michiel Borstlap and Gare du Nord, among others.

In the past years Kraayenhof and Meijer have often met backstage at several concerts and festivals. Standing on the starts that lead to the artist café at the Theater Carré the idea popped out: let’s meet up some time soon and rehearse for a few concerts together. The repertoire consists of tangos, milongas and other beautiful Argentinean/Spanish/Italian compositions from composers such as Piazzolla and Morricone, but also Kraayenhof’s own compositions. The combination from bandoneón and harp sounds magical. The already enchanted notes from each instrument complete en strengthen each other in a harmonious way. We can already say that this is a dream combination of musicians come true.