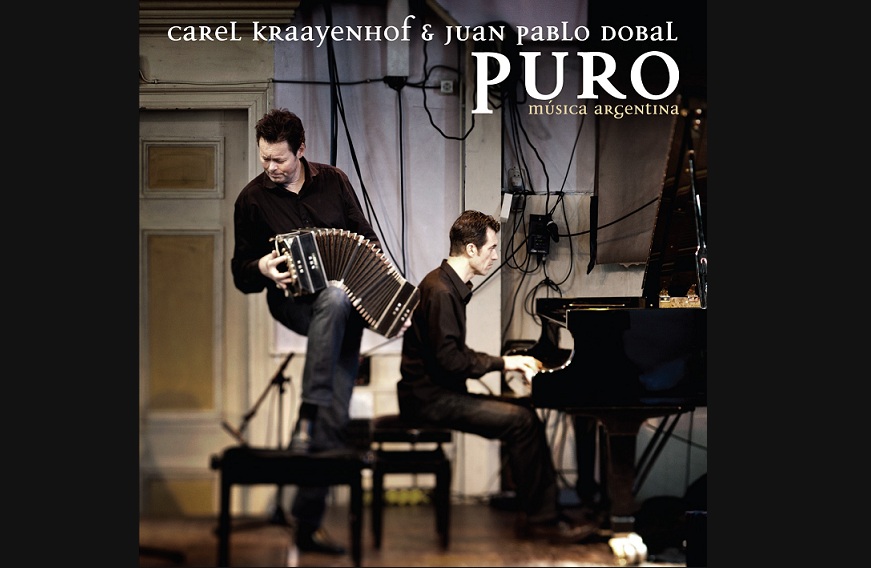 Carel Kraayenhof & Juan Pablo Dobal: „Puro. Música Argentina“
Bando Dreams
An appealingly designed cover is a good `opener´ to approach new music. With their new CD Puro, the Dutch bandoneonist Carel Kraayenhof and the Argentine pianist Juan Pablo Dobal managed exactly this, including a well-featured booklet with several nostalgic photos to indicate what the listeners may expect. Namely, a musical journey through different regions of Argentina highlighting their own different music styles (i.e., zamba, chacarera, cueca, guarania, tango, milonga etc.). The duo selected 14 songs of Argentine composers from the first half of the 20th century, i.e., from Giménez (*1904), Yupanqui (*1908), Troilo (*1914), Barbieri (*1914), Salgán (*1916), Piazzolla (*1921), Falú (*1923), Toro (*1941) and Nieva (*1932), but also from Kraayenhof (*1958) and Dobal (*1964) themselves. The fact that all songs were recorded in one day surely preserved the rich dynamic of their interpretations. With Puro, Kraayenhof and Dobal – who started to play together in 1989 with the quartet Viento del Sur and are performing as a duo since 2010 – picked up the melancholic impression of the photos from the booklet (i.e., Piazzolla´s lovely „Solitude“, Falú´s touching „Zamba De La Candelaria“, or Dobal´s melancholy „Remanso“). Yet they don´t stick with this nostalgic feeling in all songs, and that way Dobal´s „Cuando Despierto Mañana“ surprises with a lively polyrhythmic, or Salgán´s dynamic „A Fuego Lento“. Over and over the delicate sensitivity of both musicians appears – they succeed to they give `space´ for the melodies to unfold, and for their duo partnership, too.
When the „good old times“ are long gone, the spirit still lives on, invites to dream, to laugh, to weep – and maybe to dance. But actually nothing is really gone when someone remembers – and this is what this excellent duo manages to do.
Even if one may have wished that some of their selected songs would have been presented with a quartet to grasp their full depth, piano and bandoneon are tonally so rich and both musicians so sensitive in their interpretations that one starts smiling after several rounds of listening – actually nothing is missing. Beautiful the way it is.
Do these songs invite to dance? Not really (even when one could dance to all of them, of course): I was fascinated as a relished listener. But stop, there is this strange feeling in my toes: „El Antigal“… („This is not a true tango!“, „Indeed, it is a zamba.“)