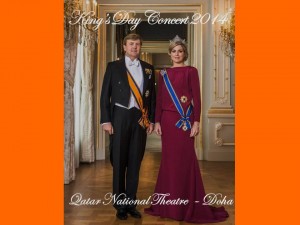 This year, the Kingdom of the Netherlands marks an extraordinary national day, as it will be the first King’s Day since the investiture of His Majesty King Willem-Alexander in 2013. The Embassy in Doha has therefore planned a special King’s Day celebration at the National Theatre on the evening of April 29th .

The King’s Day Concert will start with an official reception against a backdrop of abundant orange flower arrangements, with special Dutch delights presented by a group of lovely traditional cheese girls. The reception will be followed by a live performance of world famous bandoneón player and composer Carel Kraayenhof (www.carelkraayenhof.nl/en/). Kraayenhof’s performance at the Royal Wedding of Their Majesties King Willem-Alexander and Queen Máxima in 2002 left an unforgettable impression with many viewers across the world. Kraayenhof and pianist Juan Pablo Dobal will perform several pieces composed by themselves and various other composers.

Seats are limited and the concert is by invitation only. Dutch nationals are invited to register by sending an email to DOH@minbuza.nl. A waiting list system applies on a first come first serve basis.