At 13.00 hours the pupils gathered in the hall of the music-school Waterland where Carel Kraayenhof and his musicians previously played the works to study. Thus the participants immediately entered the atmosphere of the Argentinian tango.

Next Carel Kraayenhof very briefly told something about the history and the instruments of the tango. Together with the ensemble the most important elements were separately presented and Carel explained what is essential about them and how to play special rhythms and melodic fragments.

After that the participants were divided in 4 workshops. The string-players went to work with the violinists Iefke Wang and Bert Vos of the ensemble and the pianists with piano-player Mark Wyman.

Cellist Jan Willem Troost and bass player Jaap Branderhorst did the same with the bass player and the horn player, while Carel Kraayenhof went to work in the hall with 2 trumpet players and a soprano-saxophonist. Already during the workhops it became clear that a very talented group of young musicians was present. Everyone worked very hard on among others special rhythms, timing, playing very short notes and how to express passionate emotion.

After more than an hour of hard studying and a short break everybody gathered in the hall to work on together and to prepare for the presentation planned at 16.00 hours.

There was much interest for it and about that time the hall was entirely filled with musicians, parents, friends, collegues and members of the Rotaryclub.

The result was astonishing, touching and beautiful at the same time. Carel Kraayenhof at the end stated to be surprised by the present talent. In the name of all participants soprano-saxophonist Mairika Barbier expressed the gratitude for a fantastic music-afternoon. The participants not only had learned a lot, but also had had very much pleasure.

The Carla Leurs Competition is a musical event for young soloists in the field of classical music and is held every two years. Rotaryclub Purmerend is the organizer in cooperation with Music-school Waterland and Theatre De Purmaryn. 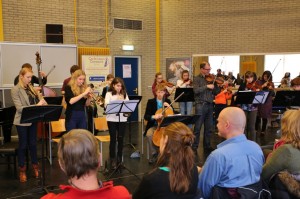 Therefore there was for all of them a workshop with the Carel Kraayenhof Ensemble on a Sunday-afternoon in the building of Music-school Waterland in Purmerend. It offered the participants the opportunity to broaden their musical horizon and to learn to know each other in a playful manner.