When a dream comes true, I wonder ‘Am I still dreaming’?

Considering that Morricone is known as Mr Spaghetti Western; in The Netherlands Carel has gained fame based on the beautiful version of Adiós Nonino which he played during the wedding of (the back then prince) Willem Alexander and Maxima, should we call Carel Mr Maxima? André Hazes, Blof, Trijntje Oosterhuis, Marco Borsato and many others well known names have used the sound of Carel Kraayenhof and his bandoneón in their songs. The tango is the passion, working in harmony with musicians all over the world, the dream. 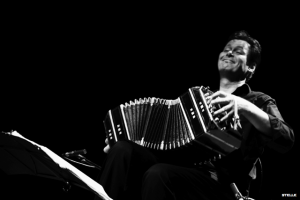 Carel’s very special sound has not passed unnoticed by the numerous conductors worldwide. The CD Guardians Of the Clouds with Ennio Morriconne and the collaboration with Kristjan Järvi are living proof from this phenomenon. Other highlights are an album recorded together with the Metropole Orkest, guest soloist appearances at the Rundfunk Sinfonie Orchestra (Berlin), the Orchester Niederösterreich (Vienna), tours through Australia, concerts is Greece, Russia, Indonesia, Corea and China, among other projects. 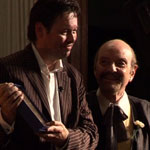 Carel Kraayenhof is the tango phenomenon of The Netherlands since the wedding of , the back then future king and queen of The Netherlands, Price Willem Alexander and Maxima in 2002. During the Carel’s emotional execution of  Astor Piazzolla’s ‘Adiós Nonino’ more than 55 million people around the world have seen ‘Maxima’s tear’.  The CD ‘Street Tango’ received in 2003 the prestigious Edison public choice award. In 2005 Carel received from the Argentinean government, directly from the well known tango poet Horacio Ferrer, the highest culture prize of the country and in 2012 Carel was honoured as Officier in de Orde van Oranje-Nassau, a Dutch Royal decoration.
Argentina rewarded bandoneonist Carel with the name ‘Tanguero’ and his Sexteto Canyengue belongs to the tango’s world class. The Duo with pianist Juan Pablo Dobal brought out its first top CD within one year of the start of the collaboration. With the new Carel Kraayenhof Ensemble another dream became reality. The best and world famous Argentinean tango players and composers taught the very talented Carel Kraayenhof the mystery of the tango and the bandoneon. Every time Carel plays you hear and feel the warmth and beloved connection with Piazzolla, Pugliese, Alvarez and Beitellmann.
[divider] 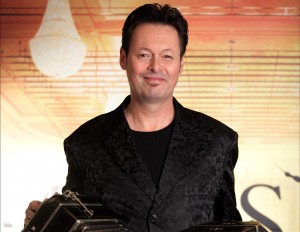 In 1993 Carel Kraayenhof and Leo Vervelde started the Specilization Argentinean Tango in the World Music Department of the Rotterdam’s music Conservatorium. The course’s frist artistic leader was Osvaldo Pugliese and through benefit concerts it helped financially the music school of Avelleneda (Buenos Aires), where tango, folklore (Argentinean folk music) and jazz are taught.

Carel Kraayenhof is available as a soloist bandoneón player for chamber and philharmonic orchestras around the world. We have own tango repertoire and own compositions available for large orchestras; with written music.
Please contact us for special orchestra programs.

In seldom events Carel Kraayenhof may perform solo.
Queries will be considered individually.