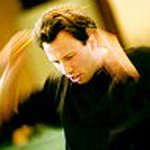 And once again, it’s name was Järvi.
This time it was Kristjan Järvi, younger brother of Cincinnati Symphony music director Paavo Järvi, in his CSO subscription debut.
It was not the first time the younger Järvi has conducted in Cincinnati. He was in the pit for Cincinnati Opera’s “Nixon in China” in July, 2007, and he came back in December of that year to lead the CSO’s New Year’s Eve concert at Music Hall. Both gave notice that there was another Järvi maestro in the wings.
Few in the audience could have anticipated, however, the tectonic shift that took place in venerable Music Hall when he took his place on the podium Friday night. It didn’t hurt that he brought a dynamite program with him, all Latin American, and also a compelling soloist, bandeonist Carel Kraayenhof.
None of the music had been heard on CSO concerts before (most likely, this was the chief reason the audience was smaller than it should have been).
Heard were Four Dances from Argentine composer Alberto Ginastera’s “gaucho” ballet “Estancia” (estancia means ranch, gaucho is the Argentine cowboy), the Concerto for Bandoneon, “Aconcagua” by Ginastera’s countryman Astor Piazzolla, and Mexican composer Silvestre Revueltas’ “La Noche de los Mayas” (“The Night of the Mayas”).

Soloist in Piazzolla’s Concerto was Kraayenhof, a bandeonista for the world, who played the instrument with matchless skill and affection.
Järvi, 37, is is an extraordinarily energetic conductor with charisma to burn. The joy he brings to making music is obvious and communicates itself readily to his players and to the audience. In this respect as well as in physical appearance, he resembles his father, Estonian conductor Neeme Järvi, whose love for music and delight in sharing it with others are legendary.
It was a further testament to Kristjan Järvi’s skill that he led the entire program from memory.
Clad in a long velvet jacket, he seemed like a panther at times, ready to devour his players with expressive intent (and usually a warm smile as well).
There were moments in “Estancia,” a Copland-esque work whose music put Ginastera on the map, where Järvi virtually mirrored the music. He led the “Wheat Dance” with dancing motions and threw cues like a lasso in “The Cattlemen.” In the concluding “Malambo,” a gaucho dance of dizzying velocity and rhythmic force, he spurred them on mercilessly, drawing an ovation to match from the audience.