Carel Kraayenhof has been busy for more than a year and even rehearsals have taken place. Now the entire world may know: together with his ensemble and two filmmakers he is creating a new theater show: ‘Liberación’. A theater production where image and music become one based on the theme ‘freedom’.
It is actually pretty logical, as the bandoneón player and composer Kraayenhof says: “At home we had an “LP” with the song ‘Ouverture 1812’. This song told the story of how Napoleon’s army were defeated by the Russian army in 1812. On the cover you could see a painting from that time period showing a battlefield. That painting showed exactly what the music was about; that made the music live. You could see what you were hearing.”
“We live in a visual time. Everyone matches music and image on their daily lives. I believe that video and music can bring extra excitement to the theater. At times the music will lead and at times the images will guide you on.”
The Carel Kraayenhof Ensemble works together with direction Jos Groenier and filmmaker Joost Gulien. Some pieces have already been worked on. For example images of the Italian island Lampedusa were already edited, here Kraayenhof wrote a powerful composition for. “The fishermen of that island are forbidden to help the African refugees who come ashore in that area of the Mediterranean Sea. ‘Not helping’ goes against their instincts and against their tradition. Long time ago, their grandparents walked on the same shoes as these refugees.”
The images fit the theme, because Kraayenhof does not make music without a meaning. “We have been a little bit around the world and everywhere you can see that the need for freedom ignites the creation of new music. In the past you could see that with the Irish, but now also with the Cubans. Liberación is about the musical freedom. Music with a fancy touch, wanting to reach higher levels.
“That is why I composed a song inspired by Tula, the leader of the slave revolution in Curaçao in 1795. This man held himself to the French Revolution’s ideal: freedom, equality and brotherhood. Based on this ideal the Haitian slaves had already gained freedom. If you travel a lot, just like we do, you gain knowledge and impressions; inspiration.”
Kraayenhof plays a short piece of music. Alex North’s slow theme for the film about the Roman slave Spartacus, who he compares to Tula. It was a milonga, melancholically colored by strings and the bandoneón. Seamlessly, and almost unnoticed, the musical mood turns Irish, when the sounds of the ‘pipes’, bagpipes, play along. “This sound is also generated by the vibration of ‘tongues’. You are influenced by people and the landscapes, you feel how it is to be there.”
All that remains the base of the tango language. That is one of the reasons why he added a piece of music from his mentor Astor Piazzolla in his song ‘Libertango’; but Kraayenhof adapted it to the style of his other musical father: Osvaldo Pugliese.

“Don’t expect an extremely serious evening. Humor and optimism are a great part of it. Just think of how people with big problems, in many different countries, are great in improvising. Argentineans are masters in that, and also in Indonesia they have a good hand in it.
At the end of this year the try-outs will take place and in the beginning of 2015 ‘Liberación’ will have its premiere. Until then a lot of investments have to be done. Challenging, because subsidies are pretty hard to get, or unexciting and because it is such a new concept theaters are somewhat hesitant to book the show. In order to manage to put all that money together we have started a crowdfunding campaign. That means that whoever supports this project financially will receive a special something in return; from an hour at the gym with Carel to a new composition written by Carel dedicated to the supporter/sponsor. How are you going to do that? “This summer I won’t be bored, writing on request is not that crazy, I may even say that it is nice. Composers such as Mozart and Beethoven lived of it. 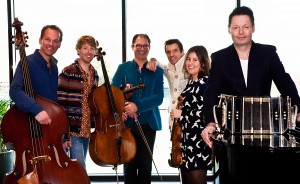