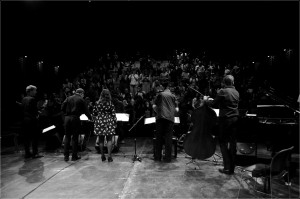 The Carel Kraayenhof Ensemble is back from a great tour in Indonesia. Next to the successful concerts at the Theater Salihara and at the Erasmus Huis, both in Jakarta, the Ensemble also gave a beautiful concert in the Kraton in Yogyakarta. The Sultan and his family live in this “Kraton” and during the concert we were honored by the presence of his oldest daughter, the crown princess. It was a pleasant surprise to see that many of the visitors who were present in our last concert, two years ago, were once again present during these concerts. At the Erasmus Huis we were able to give an entire concert with the collaboration of local musicians, two dancers and to play a song with the enormously popular Indonesian pop idol Calvin Jeremy. The workshop and master class in Argentine Tango in Jakarta and Yogyakarta were a lot of fun. In Yogyakarta we had some challenges to get enough musicians to join, considering that the strings and piano players had they main exams on that same day! For that reason we had an interesting mix musicians in the classroom, even drummers and electrical guitar students. Luckily they jumped right in, with Juan Pablo’s first rhythmic notes and enjoyed the Argentine tango and folklore. Full of enthusiasm they watched on the following day our concert at the Kraton.
For the Ensemble it was great to be able to play the new repertoire, this not only for the new theater show ‘Liberación’, but also as preparation for the CD recording on the 17th, 18th and 19th of June.
The rest of the month we will be working on mixing and assembling the music recorded. This new album will also be released under our own label. The official release will take place on the 28th of October.

Repertoire CD ‘Liberación’
After more than one and half year of preparation we are proud to confirm that this new album will have even more own compositions than our last one. We are also glad to share with you the titles of songs that will be present in the album. Carel’s own compositions: So Long, Island, Cry for freedom, Ida y vuelta, Lampedusa, Bamestra, Aleppo, El fuego del fueye, Charlotte, Lament, Un tornillo en la maquina tanguera, El Corte.
Juan Pablo’s compositions: Candombe sin esclavos, Andes.
The dates for the theater tour are already known, please visit our website for the dates and you may also contact the theaters for tickets purchase.

Portugal
If you are planning a vacation to Portugal this summer, maybe an option is to visit Espinho on the 25th of July. On this date, at 22:00hrs Carel will give a concert at the main square, together with the Classical Orchestra of Espinho. Carel will join the orchestra as bandoneon soloist playing the first three parts of “Aconcagua” – Concerto for bandoneón and Orchestra and Adios Nonino from Astor Piazzolla.
This concert will take place as part of the 40th International Music Festival of Espinho.
Summer vacation
From the 7th to the 16th of July our office will be closed for a summer vacation.