Dear friends and colleagues,
The summer 2015 has started last Sunday the 21st of June and the clouds dripped thick raindrops. Together with Juan Pablo we drove on that day to a concert in Elkrade. Once we arrived at this beautiful South-Limburg small town we were blessed with sunrays through the clouds guiding us toward our German neighbors. It was a gorgeous Sunday afternoon with a DUO concert, at the former pig’s stable, as part of the ‘Muziekdagen Eys’. After this afternoon we realized how diverse and fascinating our concerts are. In the month of May Carel was twice at Ahoy Rotterdam with the Rotterdam’s Philharmonic Orchestra in the beautiful and successful production Julia! Next to it he the Artist in Residence during the perfectly organized Rabbobank Jazz festival in Amersfoort, where one of the concerts was a concert with the Sexteto Canyengue at the Lieve Vrouwkerkhof. Just a few days later, the Carel Kraayenhof Ensemble played a couple of numbers at the Dam Palace in Amsterdam where our Curaçaoan friend Millicent Smeets-Muskus received a special decoration (the zilveren anjer) from the hands of Prices Beatrix. King Willem-Alexander was also present during the event.

TV and new CD
In the meantime, the future is calling for attention.
Carel will record an episode of the TV show ‘Linda’s summer week’ (Dutch channel RTL 4, airs on the 28th August) where he performs a song together with singer Wouter Hamel. Following that, Carel and Juan Pablo will record their new album ‘Hotel Victoria’ on June 28 and 29 at Splendor in Amsterdam. 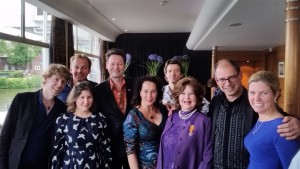 Summer break
This year we have decided to take our summer break between 9 and 28 of July. Our office will be close during this period.

Open-air concerts CKE – August
Don’t miss this chance!
In early August the Carel Kraayenhof Ensemble will perform a few open-air concerts in different locations in The Netherlands. In Noordwijk at the beach; in Alkmaar at the Canadaplein; and in Amsterdam at the Vondelpark. For more information please visit our website.

Liberación
For everyone who was not yet able to catch one of the Liberación theater shows, there are a few chances left. On November 19th we will perform at the Munttheater in Weert (NL) and on November 28th at the Philharmonie in Haarlem. During the next season the Carel Kraayenhof Ensemble will also perform the repertoire from the CD Liberación (available at our web shop) in a concert version: ‘Liberación In Concert’. These are concerts without the special scenography, light design and the beautiful video images. For more information and concert date please visit our website. 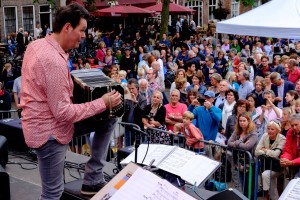 Musicians Information
Did you know that in our website you can find more information about most of our musicians and crew? Look for the biographies and click on the button ‘Insider’s view’. You can also find this for Thirza, Juli and Rimmert on our contact page. We would like to know what do you think about this new information.

We wish you a great summer. For the ones going on vacation, we wish you a great trip and a safe return home. In the name of our musicians and our team we thank you for your support on the first half of 2015. We are always glad to hear back from you. Please feel free to reach us on Facebook or on Twitter. 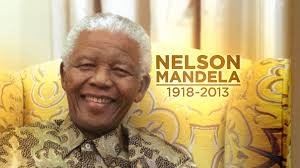 When Carel was asked to write a new piece for this special event he thought immediately on a homage to one of the greatest fighters for freedom, Nelson Mandela. He, who during his long life won friends and enemies on his fight for freedom and equality for everyone. As a lawyer, as an ANC leader, from prison and finally as president from a new South Africa. His commitment, his patience and optimism are sources of inspiration for mankind.

Kraayenhof’s new composition breathes happiness, just as the irresistible laugh from Madiba (as his friends called him and as this composition is called). It sounds just like a film where he starts a speech and then starts dancing and partying.
Bandoneón and strings form a South African choir and the piano and bass lead a contagious rhythm, where the pianist almost seems to play the kora.
At the end of the composition the serenity comes back, as the sound of a choir at a night camp fire.

We are looking forward to the 5th of May, so we can share this and celebrate with you! 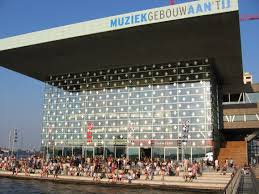 For the special event of our theater show Liberación on Liberation Day, 5 May 2015 at the Muziekgebouw aan ‘t IJ in Amsterdam, I have composed a new piece which I will perform together with the Carel Kraayenhof Ensemble during the exclusive Liberation Dinner, prior to the show.

When asked to compose a new piece for this special occasion I thought immediately on an homage to one of the most important freedom fighters of all times, Nelson Mandela. During his long life Mandela made friends and won over enemies on his battle for freedom and equality to all. As a lawyer, as the leader of the ANC, from jail and finally as president of a new South Africa. His clear purpose, his patience and optimism are sources of inspiration for the entire world.

My new composition breathes happiness, just as Mandiba’s irresistible laugh, as his friends would call him. That is also the name of my composition. It is just like a movie, where he is at first calm and emotionally speaking, after that he starts to dance and party.
The bandoneón and the strings will form a South African choir, where then the piano and double bass will light up a firing rhythm. At times it sounds like the piano player is actually playing a kora.

The calm returns at the end, just as a choir sings around the bonfire deep in the night.

We are looking forward to the 5th of May, so we can celebrate freedom together with you!

On Sunday afternoon March 1st, the Carel Kraayenhof Ensemble will be the guest of the new popular tv program Podium Witteman, on the Dutch channel NTR NPO 2.
The program will be live, at 17:00 hrs.

The program is a weekly music festival presented by Paul Witteman together with pianist and comedian Mike Boddé and music connoisseur Floris Kortie. The program talks about special topics with guests and offers a platform for new and known musicians to play live.

The program is presented live from the brand new “De Hallen Studios” in Amsterdam-West.
Audiences may join the program free of charge, by signing up via the email: bijwonenpodiumwitteman@ntr.nl.
for more information: www.https://programma.ntr.nl/10627/podium-witteman

We have received requests from some of the audience of our Liberación theater show about a poem which is part of the show. Here is the complete translation of the poem No te rinds, from the Uruguayan writer Mario Benedetti.

Don’t give up, you still have time
to reach up and start anew,
Accept your shadows,
Bury your fears,
Free your burdens,
Fly again.

Don’t give up, that’s what life is
Continue the journey,
Follow your dreams,
Unstuck time,
Move the rubble,
And uncover the sky.

Because life is yours and yours is the desire
Because you have loved it and because I love you
Because wine exists and love is true.
Because there are no wounds that time doesn’t cure.

To open the doors,
Take away the locks,
Abandon the walls that have protected you,
To live life and accept the challenge
Get back laughter,
Practice a song,
Lower the guard and extend the hands
Open the wings
And try again,
Celebrate life and take back the skies.

Because every day is a new beginning,
Because this is the hour and the best moment.
Because you are not alone, because I love you. 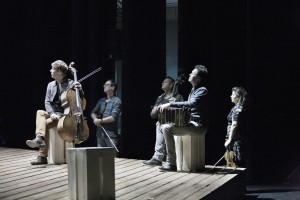 Carel Kraayenhof and Thirza Lourens, together with the musicians and Liberación’s entire crew, are more than happy with all positive reactions from the different theater audiences. Our social media is glowing.
We hope that this will bring even more people to the shows, so they also can enjoy this special evening. 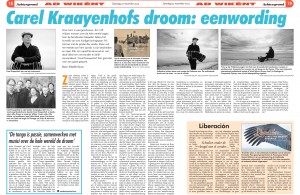 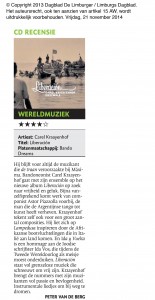 On the 21st of November another great review came out for the CD Liberación. This time at the Dutch newspaper Dagblad de Limburger.

He will stay forever the musician who brought Maxima to tears. On his new album Liberación, bandoneón player Carel Kraayenhof is going, together with his ensemble, on a search for freedom and happiness. It is pretty much a given that a piece of composer Piazzolla is also present on the CD, the man who lifted the Argentine tango to a form of art.
Kraayenhof himself also signs for a number of compositions. He was inspired by Lampedusa and the African boat refugees who set foot on land in Italy. Ida y Vuelta is an homage to the Jewish writer Ida Vos, who during the Second World War as a young girl who had to go into hiding. Liberación is full of boundless music crying for freedom. Kraayenhof brings the numbers to life with his musicians full of passion and inspiration. Instrumental songs to dream of. 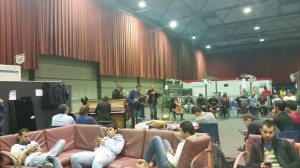 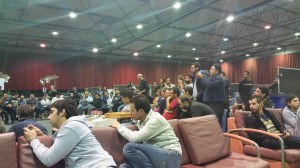 This past Saturday (November 15 2014), the Carel Kraayenhof Ensemble gave a special ‘Liberación’ concert in Zwolle (The Netherlands) to the Syrian refugees living in the IJsselhallen.

This past weekend Liberación received another 5 star review. This time from the Dutch newspaper TROUW.

Translation:
A powerful statement on the bandoneon

WORLD
Carel Kraayenhof Ensemble
Liberacion (Bando Dreams)
*****
__________
The current situation in the world brings engagement back in pop music. Last week Bob Geldof announced his Band Aid project against Ebola, Izaline Calister and Leoni Jansen started their protest song tour ‘Barricade’ and Carel Kraayenhof’s latest album ‘Liberación’ was released. With this the greatest bandoneón player in the world is asking attention for all refugees who, forced by political or economical circumstances, had to leave home and loved ones behind.
‘This is how the tango originated, from the fusion-music of migrants; keeping alive the hope for a better future’, he stated on the CD booklet.
The CD starts with the sound of the sea, the symbol for a connection to freedom as well as a frightening escape route. Titles like ‘Aleppo’ and ‘Lampedusa’ say enough.
Not one instrument is so complex as the bandoneón. It plays rhythm and melody together and possesses a melancholic and resilient character at the same time.
Kraayenhof’s playing – vigorous, sad and tough – reflects in all buttons his powerful statement. Piano and strings surround him comforting and evocative sounds delivering powerful counter play. Even the widely known ‘Libertango’, that for composer Astor Piazzolla symbolized liberation from the traditional tango, now gets a beautiful new arrangement and with that, a new interpretation.
Mr. Geldof, may Kraayenhof also take part at the Band Aid event?