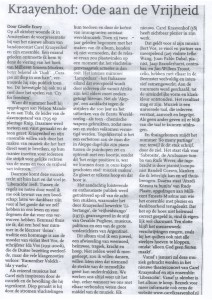 This review was posted on the newspaper of 31st of October.

Translation:
Kraayenhof: tribute to freedom
By Giselle Ecury
On 28 October I attended, in Amsterdam, to the official presentation of the new album of bandoneonist Carel Kraayenhof and his ensemble. A month ago I met him during Millicent Smeets-Muskus’, better known as ‘Dudi’, book presentation. ‘Curacao is deep in our heart’ he confided to the audience at that time. He confirmed that now as well, by playing ‘Cry for freedom’.
He dedicated this number to Nelson Mandela and Tula, the leader of the slave uprising of 1795 on plantation Knip. Right there the tone was set for the afternoon: Kraayenhof and his ensemble want to stand for equal rights and freedom to everyone. And they do that by making music that touches straight to the heart.
This music comes straight from their hearts, and that you can feel. ‘Liberacion’ lives. Between the lines and the notes I start to understand the message: let’s be grateful for all the good we have in our life and for those who fought for that for us. Once back home I notice a very tender song in the klezmer ‘doina’-tradition, it is a tribute to the mother of violinist Bert Vos. The writer Ida Vos (1931-2006) survived the German occupation, but lost many school friends. This song is called ‘Rumeniher Volekh – Ida y vuelta’.
As a traveling musician Carel lets himself be inspired by the music and the people he encounters. He is deeply touched by the multitudes of refugees, which appear to be unstoppable. By their ways and becoming immigrants in another country, world music arises. When the Carel Kraayenhof Ensemble started making this album, two years ago, they didn’t even suspect that the release of it would take place at a moment when the refugee issue is more relevant than ever. The intense number ‘Lampedusa’ – the Italian island which is flooded by refugees from Africa searching for safety – is a proof of this. Just like ‘Aleppo’, a cry out against the warriors who, 100 years after the break out of the First Worldwar, still use chemical weapons causing devastation to the population and entire cities. At the same time it is a tribute to the man in Aleppo who places his piano, every day, among the debris and performs with a little choir. “Because this is the only positive thing we can do in our destroyed city: make music”. So hope prevails; and that you can also hear.
The attentive listening audience was treated with eleven of the eighteen tracks, under which ‘Libertango’, the ‘freedom tango’ (1973), arranged by Kraayenhof in the style of Osvaldo Pugliese; musician, politician and one of the great peacemakers of Argentina.
I think this album is a jewel, a variation of melancholy, nostalgia, tragedy, power and hope. Several times I was carried away, felt like dancing, I wanted to show that nobody can oppress the power of the human spirit. We always recover, especially when we feel united with each other by means of music. Every goodbye is the birth of something new. Carel Kraayenhof (1958) clearly enjoys what he is doing.
This goes for all his musicians: Bert Vos, 1st violinist and partner of also violinist (2nd) Iefke Wang; Juan Pablo Dobal, pianist; Jaap Branderhorst, double bass; and Jan Willem Troost, cello. They all have worked together, frequently and intensively, rehearsing in the Beemster. The result is magnificent. Music is a universal language, which everybody understands and senses. They show that they can spread that language as no one else.
And after coming home, while writing this column, the number ‘So many partings’ touches my soul. It is the number right before ‘Sabrosita’, the Aruban tumba by Rufo Wever, arranged by pianist/composer Randell Corsen. These sounds I can and want to literally take home with me. The next track is ‘Atardi Korsou ta bunita’ by Rudy Plaate, dedicated to Millicent Smeets-Muskus, who the ensemble remembers with bliss and gratitude. It isn’t spelled quite correctly on the cover, but I think that’s actually a bit charming. After all it is the work of men, mistakes are allowed. Like in quilting, not all stitches need to be perfect, because ‘only God makes no mistakes’.
As of the 1st of January this music will be performed in the new theatre show by Carel Kraayenhof and his ensemble: ‘Liberación’. As of the 31st of October the album is for sale. For more information you can visit, and enjoy, the website www.carelkraayenhof.com.