At the end of December the Dutch newspaper, Noordhollands Dagblad published the following article: 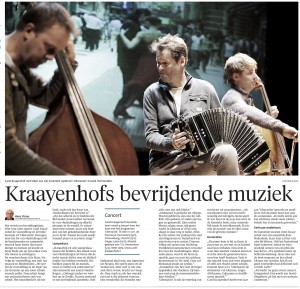 It will be a liberation celebration. It is not meaningless that Carel Kraayenhof names the performance, and the matching CD, ‘Liberacion’. Moved by the fate of the refugees, the bandoneón player and composer wants to present music that brings comfort and offers power and hope to people allowing them to, at least for a moment, transcend all the misery.
The extraordinarily beautiful CD is ready. Now follows the performance, a mixture of music and film-images: “We play under the direction of Jos Groenier on a kind of sloping pallet. Behind that hangs a projection screen, also a little bit tilt. The image of the stage is out of balance, just like the lives of refugees are out of balance.”
“On that screen you see images which moviemaker Joost Gulien collected, images of refugees in all kind of places all over the world. In between there are interviews, but also images of bombed Aleppo in Syria. In the debris somebody plays a piano and a choir is singing. Of course Lampedusa is also between the images, the isle where refugees arrive, who survived the journey from North Africa across the Mediterranean Sea. These images fit the music, but at the same time they will contrast.”
He encountered a number of refugees. “The other day we performed for some refugees in Zwolle. After that an exciting jam session started. Mohamad also participated, an engineer from Aleppo. He played the piano and the Turkish oud. Then you feel what music does: brings comfort, power and joy. There you experience also how music is a language that everybody understands. Even though the Syrian music may sound so very different for us.”
“Mohamad fled from Aleppo. If he had stayed, he probably would have been killed, or else captured and tortured. His parents stayed behind, but his family is waiting in Lebanon whether he succeeds in getting them away from there. He left everything behind. Now he is trying, here in Holland, to start a few activities for his fellow refugees. That’s why we want to collect – together with Foundation Vrolijkheid – instruments for those refugees. My old piano, on which I used to play as a child, now goes to the asylum in Ter Apel. Mohamed will play there very soon.
“Of course often the higher educated are the ones who can flee. They are often still able to pay the refugee-smugglers.”
‘Liberacion’ is also the reproduction of a life full of concert-journeys. “As musicians we are a peculiar bunch of travellers. Sometimes I play more pop and then again the classics, but eventually I play world-music. That is not the music of the upper class, but of the common people.”
“With this music you visit them at home. You talk with them, eat with them and listen to their stories. Then you know where their music comes from and what it meant to them through the generations. Often is new music itself that determines the end of the escape. That’s why you hear in ‘Liberación’ the elements of klezmer, tango, African, Cuban and Antillean music.”
Carel Kraayenhof has worked two years on ‘Liberación’ and with it he presents himself more than ever as a composer. “I notice, that in writing I experience more and more pleasure, it has become a passion.”
The tour will bring Kraayenhof and his ensemble throughout the Netherlands, but it will for sure not stop there. There is also interest from abroad: traveling and leaving a beloved place: “The other day we played in Schiermonnikoog. When you sail away on the ferry and you see the island getting smaller and smaller you can imagine how definite such a departure feels. Now don’t expect a heavy concert. On the contrary, it will be a celebration of liberation, but with a serious undertone.”