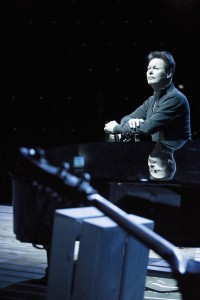 Hotel Victoria
The nomadic lifestyle of artists was the inspiration for a new album: ‘Hotel Victoria’. Kraayenhof: “There are nice aspects about travelling, but people often don’t realize that about 80% of life of a musician consists of travelling and rehearsing. We go from city to city, at times I compare ourselves to sailors. The actual concert is often just a piece of the puzzle, exactly the piece which is, for the audience, an evening out. Grab a bite to eat or a drink before or after the concert… it is actually better that they don’t even realize that. For the musicians it is a strange combination of passion, work and hobby; that is the life of an artist.” During these travel times, the hotel is often their second home. On this new album Kraayenhof also makes an ode to his mother. “Nowadays she is kind of a bed & breakfast for me. When I have to play in the south of country I say over at her place, and then she joins me to the concerts”.
Love at first sound
The eight-year-old Carel had no idea about ‘the life of a sailor’. At that age he discovered music. “When I was eight years old I started to take piano lessons, I used to play a lot of classical music. When I was eighteen and studying philosophy in Amsterdam, my brother introduced me to Scottish and Irish music. I thought it was beautiful! I started to play Folk music and my brother managed to get me to buy a diatonic button accordion. Not much later than that I heard a bandoneón playing on an LP, at a friend’s place. That was love at first sound. I bought my own bandonika and taught myself how to play it.
Drama
But it did not end there. One day, when Carel was playing at the Vondelpark in Amsterdam, an Argentinean man sat right next to him. Kraayenhof remembers: “He thought it was really nice that I was playing that specific instrument, he was going to arrange for me to get a bandoneón from Argentina. I pretty much taught myself how to play the bandoneón. I sat behind the piano, played a key and looked for the same tone on the bandoneón. It is a very rich instrument. You can play accords and melodies on it, I have seen people playing Bach on it, but that is strenuous. Playing the bandoneón is amazing, but it is dramatic to study it. For 15 years I played pretty much only tango, after that I started to play other genres and to compose music myself.” When Kraayenhof met Piazzolla in The Netherlands a special development took place: “He invited me to go to New York, to work at the Broadway production Tango Apasionado. It was fantastic!”
If you have to choose: The Netherlands of Argentina
“That is a difficult one! I probably would not choose to live in Argentina, there I can’t do what I do here. I would have to fly non-stop, everywhere, just to get bread on the table. I would not even have time to compose. A bad crisis weights down over there, politically and economically the country is a disaster. But the climate and the people are warm and they have a kind of social connection that we don’t have here. The neighbors once had an Argentinean girl staying over for some time, she was surprised about our egocentric way of life. Not greeting each other, not giving up your seat at the bus: for her that was unthinkable. That kind of thing I also really miss over here.”
What would you choose: your own work, or the work made by someone else?
“Lately I have been working a lot on my own work, but I also really enjoy music that is already out there. Bernstein for example, he has written amazing music. My parents used to listen to the West Side Story all the time, and if I play that album, I am amazed all over again. During concerts I also play some amazing little pieces which I could never write myself. Everyone writes in a different way! Music connects. It is neutral, a free language where everyone can express themselves spontaneously”.
Do you prefer playing alone or together with someone else?
“Then I choose to play in a duo or with an ensemble. To play the bandoneón solo is nice, but also very complicated. The bandoneón shines brighter when played together with other instruments. I love how it sounds together with a harp or violin for example. I have also composed music for a sextet, this way you can do much more with the different tunes.”
What do you dream about?
“I really enjoy movies and documentaries, and I really would like to compose film music. But yes, I am a self-taught composer and with film music you always have to work with deadlines, you might have to finish a piece in a month for example. I might never be able to do that. And on my next life, I would like to be an actor. An actor lives so many lives at once! I would not take that step now; I have way too much to do in the music. When I hear that someone wrote a book, I am also a bit jealous. But I don’t feel that we, here in The Netherlands, are stimulated enough. Everything has to be so structured. I, for example, really came out of my shell when I was in Argentina. That was an extremely inspiring experience, I wish that for everyone!”
Come listen live to Carel Kraayenhof! Order your tickets to the April 23rd 2016 concert via:
https://tickets.edescheconcertzaal.nl/nl/tickets/380-carel-kraayenhof-bandoneon-en-juan-pablo-dobal-piano-hotel-victoria