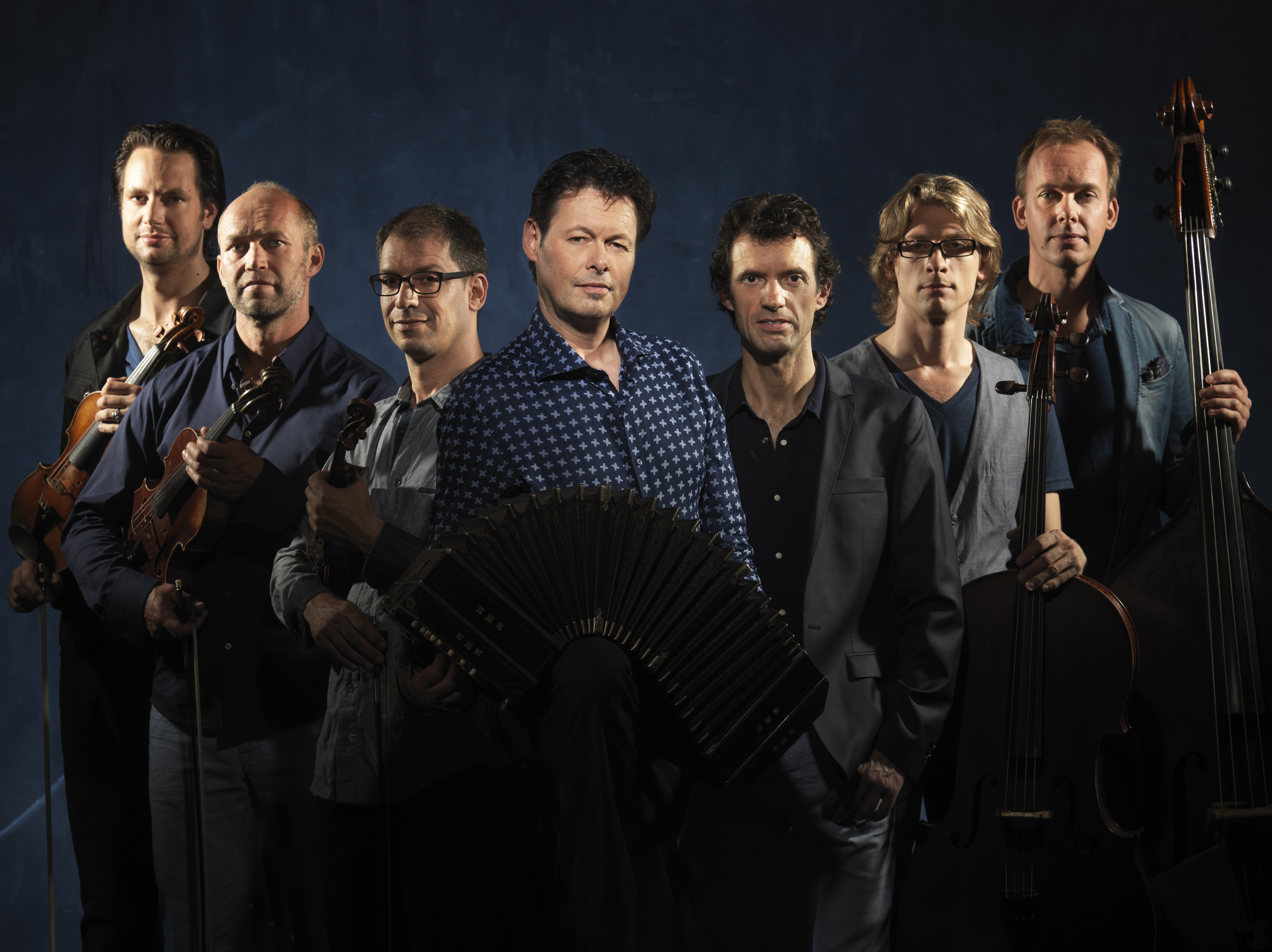 Carel Kraayenhof (bandoneonist, composer)
Carel Kraayenhof (1958), bandoneonist, composer and arranger, is the most fascinating and versatile bandoneonplayer of this time. Unique in his playstyle because of his wide knowledge of the  Argentinian tango, he worldwide moves every audience with his enchanting and honest playing.
As a result of his cooperation with Astor Piazzolla (†1992) in 1987 during the broadwayshow ‘Tango Apasionado’ and his many years lasting personal relationship with the beloved tangomaestro Osvaldo Pugliese († 1995) he developed himself as one of the most admired bandoneonists of this moment.
One of his highlights was on 2-2-2002, when during the marriage of His Royal Highness Prince Willem-Alexander and Her Royal Highness Princess Maxima he performed in a passionate way the moving ‘Adiós Nonino’ by Astor Piazzolla. Besides his work in the past 21 years with his Sexteto Canyengue, his duo (since 2011) with pianist Juan Pablo Dobal and his Kraayenhof Tango Ensemble (founded  September 2011) he also worked with celebrities  of the classical music including: Ennio Morricone, Yo-Yo-Ma, the violinists Janine Jansen and Joshua Bell and the cellist Quirine Viersen.
He’s a popular bandoneon-solist in several  international symphony-orchestras like: the London Symphony Orchestra, Berliner Philharmoniker, Orchestre National de Lyon, Tonkünstler Orchestra (Vienna), Hong Kong Philharmonic Orchestra, Cincinnatti Symphony Orchestra, Sydney Symphony Orchestra, London Philharmonic Orchestra with Sting, and many others.
Carel does not restrict himself to one music-style, that’s proven by his cooperation with the singers Dulce Pontes and Sting. In Holland he recorded songs with for example André Hazes (Bloed, zweet en tranen), Bløf (Barcelona, Bougainville, Geen Tango), Trijntje Oosterhuis (Nu dat jij er bent), Dana Winner (Afscheid van een vriend), Guus Meeuwis and he performed with Marco Borsato.
Carel received many awards, among which in 2003 the Edison Public Reward for his CD ‘Tango Royal’ and in 2005 the Argentinian government rewarded him with a high award for his inexhaustible effort worldwide for the Argentinian tango.

Juan Pablo Dobal (piano)
Juan Pablo Dobal was born in 1964 in Buenos Aires, Argentina. From his ninth year he plays the piano and from his fifteenth year he regularly performed classical concerts. On his seventeenth he got his certificate music-teacher and when he was twenty-two he also got the certificate music-teacher  at the national conservatory. In spite of his classical education Juan Pablo also has always been active in the field of improvised music, Folklore, Tango, Jazz and Latin-American music. On his 25th he settled down in Amsterdam where he was a member of a quartet of that time ‘Viento del Sur’ in which Carel Kraayenhof also played. Since that time he worked as a pianist and composer with several artists as Fernando Lameirinhas, Leonardo Amuedo, Raymond van het Groenewoud, Stef Bos, Alfredo Marcucci, Gustavo Toker and the Aurelia Saxophone Quartet. In 2008 he released in Argentina his solo-CD ‘ Loco corazón’. With his own theatre-shows he performed in the whole country of the Netherlands. Since the end of 2010 he is the new pianist of the tango-duo with bandoneonist Carel Kraayenhof, Sexteto Canyengue and the Kraayenhof Tango Ensemble.

Tijmen Huisingh (1# violin)
Tijmen Huisingh studied at the Conservatory of Amsterdam with Lex Korff de Gidts, Jan Repko and Ilya Grubert and in October 2004 he was allowed to enter ‘The International Competition Preparation Course’ of the Scuola di Musica in Fiesole as a pupil of Pavel Vernikov. He followed masterclasses,  solo as well as in chamber music style, of Viktor Liberman, Krzysztof  Wegrzyn, Donald Weilerstein, Stefan Metz, Valentin Berlinsky, Norbert Brainin and Sigmund Nissel (Amadeus Quartet), the Párkányi Quartet and the Brodsky Quartet. He regularly replaces in the Mahler Chamber Orchestra, Combattimento Consort Amsterdam and Amsterdam Sinfonietta and as assistant-leader of the European Union Chamber Orchestra. During the last season he also could be listened to as a solist with this orchestra.
Tijmen won awards in national and international contests as the Lordens Violindays and the Princess Christina Contest. With the Italian pianist Alessandro Barneschi he was in 2007 the winner of the International Chamber music Contest ‘Premio Rovere d’Oro’ in Italy. He is violinist and fellow-founder of the ‘Amsterdam Chamber Soloists’. Tijmen plays a violin of J. B. Vuillaume, made in 1850 with a bow of J. A. Vigneron. The instrument is placed at his disposal by the National Musical Instruments Fund. Since July 2011 Tijmen is part of Sexteto Canyengue and the Kraayenhof Tango Ensemble.

Jaap Branderhorst (double bass)
Jaap Branderhorst studied guitar and double-bass at the Sweelinck Conservatory in Amsterdam. After his study he played in almost all Dutch symphony-orchestras, like the Royal Concertgebouw Orchestra with which orchestra he made many concert-journeys   all over the world.
Jaap also played in several modern music-ensembles as the ASKO-Schönberg Ensemble, the New Ensemble and the Xenakis Ensemble.  For many years he was the double-bass-player of the Escher Ensemble. Furthermore he manifested  himself  in the field of the light music.
With friends he started the Petit Orchestre Orange , a band specializing  in the jazz-style  of the twenties. Since 2005 Jaap is the double-bass-player of Sexteto Canyengue. Also in the Kraayenhof Tango Ensemble he appears on stage with Carel and old acquaintances of Sexteto Canyengue.

Bert Vos (2# violin)
Bert Vos started playing the violin at the age of seven. On his sixteenth he became the leader of the Hague Instrumental Youth Ensemble. Two years later he went to study with Jan Hulst at the Rotterdam Conservatory. In 1993 Bert Vos was the only Dutch musician in the International Youth Orchestra in Israel, under the direction of maestro Lorin Maazel.
Bert followed masterclasses in a.o. Stuttgart and New York. After getting his certificate of Teaching Musician he continued his study Performing Musician at the Rubin Academy in Tel Aviv. He also was a member of the Gertler String Quartet. Back in the Netherlands Bert became a violinist of the Escher Ensemble and a regular guest-player in the Gelders Orchestra. Bert is the leader and founder of the klezmerband  Shtetl Band Amsterdam. Shortly Bert is a member of the ensemble Novaya Shira of lady-singer Shura Lipovsky. Since spring 2005 Bert is 2# violinist/viola-player of Sexteto Canyengue and also in the Kraayenhof Tango Ensemble he functions as 2# violinist.

Robert Meulendijk (viola)
Robert Meulendijk studied the viola with Nobuka Imai and Prunella Pacey at the Utrecht Conservatory, where he got his certificate Performing Musician in 1991. He followed lessons in chamber-music with Eli Goren, Viktor Liberman and got masterclasses from Sigismund Nissel  (Amadeus Quartet) and Walter Levin (La Salle Quartet). As a solo-viola-player he played in the National Youth Orchestra in 1987 and since 1989 he worked in the Radio Symphony Orchestra. From 2005 he works in the Radio Philharmonic Orchestra in Hilversum and he played several times in the European Community Chamber Orchestra. Together with this classical repertoire he regularly cooperates in recordings of artists as Toots Thielemans, Marco Borsato and Trijntje Oosterhuis, De Kast, Ruth Jacott, Jan Rot, U2 and Michelle Courtens, the Dutch contribution to the Eurovision Songfestival 2001. Since 2011 Robert plays in the KTE. He plays on a viola of Max Möller made in 1948.

Karel Brederhorst (cello)
Karel Brederhorst got his first cello-lessons at the age of twelve from Jet van Baaren and he studied  with Monique Bartels and Paul Uyterlinde. In 2009 Karel finished his study at the Musikhochschule Lübeck with Troels Svane with the highest possible grades. Karel played on several national and international festivals, where he performed with musicians as Midori, Paul Rosenthal, Daniel Rowland, Alexander Baillie and Ian Fountain. Musical inspiration and coaching he got from a.o. Gustav Rivinius, Anner Bylsma, Gary Hoffman, Miklós Perényi, Steven Isserlis and David Geringas. Furthermore Karel played in the En-Accord Quartet, worked as a replacing solo-cellist in the Lübecker Philharmoniker and travelled with Herman van Veen through Germany, Switzerland, Austria and Curaçao. At the moment Karel also plays in the Cello8ctet Amsterdam, is a member of Cuarteto Sol Tango and often performs as The GoOzer. Since 2011 Karel performs cello in the Kraayenhof Tango Ensemble.