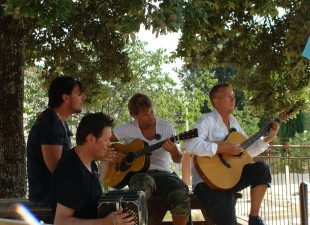 Today the new single ‘Geef me je naam’ (Give me your name) of the 3Js is available on which Jan Dulles sings a duet with Elske De Wall. The song was written by the 3Js after their work for the charity of which they are ambassador: Terre des Hommes. Last summer Carel Kraayenhof was invited by the 3Js during their tv-recording in France of the TROS program ‘De Zomer Voorbij’ (aired 24th October, Ned 3). For this program Jan Dulles asked Carel if he was allowed to write Dutch lyrics on Mis Pibes, one of Kraayenhof’s compositions. This became a beautiful version and so they decided to put it on the B-side of the new single of the 3Js with the title: Kinderen ( Children). Do buy this single for the charity and listen to this little diamond! We are very proud of it!

Kraayenhof Tango Ensemble thanks the Erasmus Huis in Jakarta