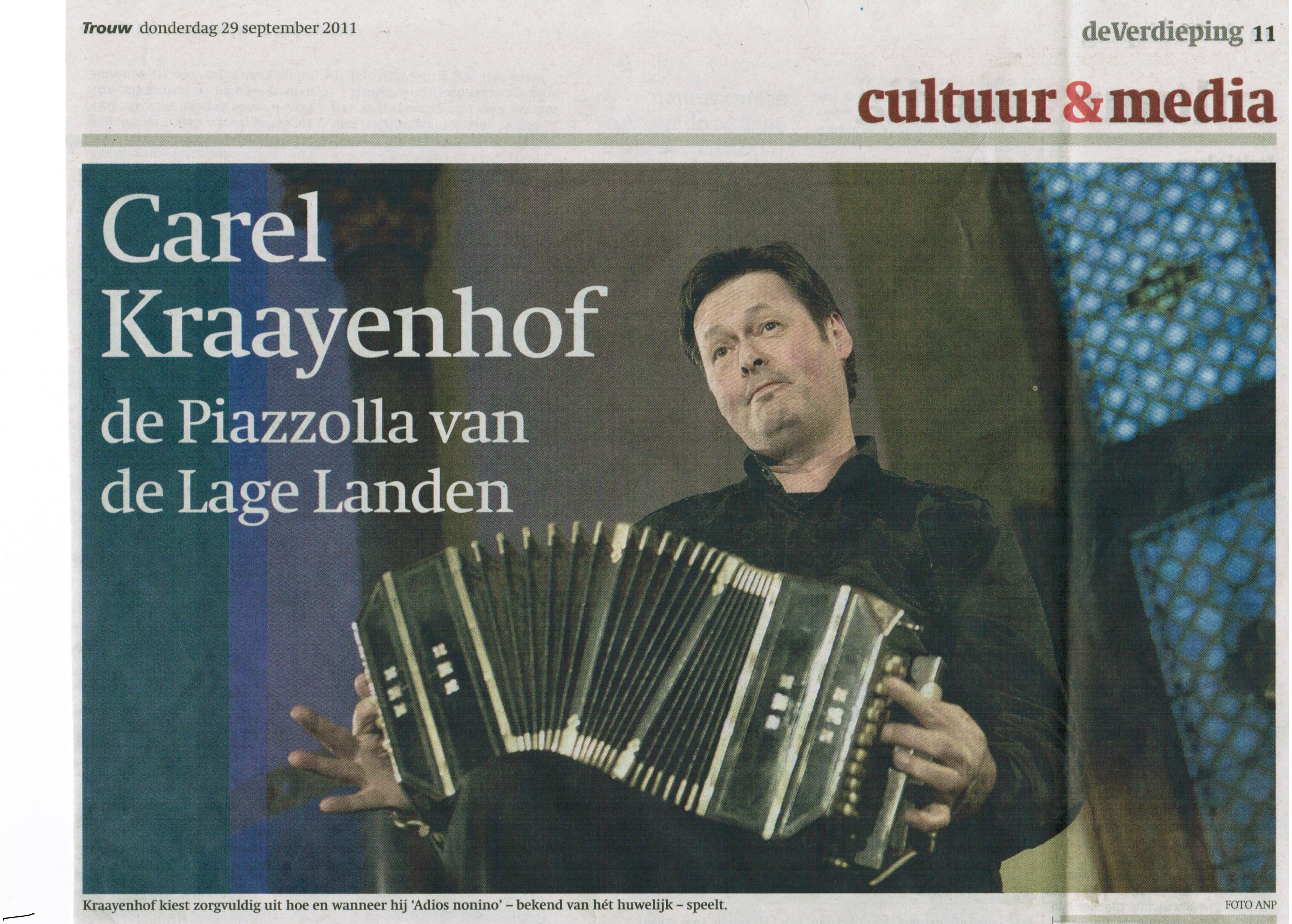 Composer and bandoneonplayer Carel Kraayenhof recently received ‘de Gouden Eeuw Award’ (“the Golden Century Award”) for his entire works. He and his sextet lead the National Ballet at “Van Manen’s ‘Five Tango’s” and tours through the Netherlands with the new production ‘PURE’.

Carel Kraayenhof (1958) might be the world’s well-known bandoneon-player. From an Astor Piazzolla-fan he revealed into his testator. Just like his Argentinean tutor, who wrote about 300 compositions and by that dignified the bandoneon to a fullworthy concert- instrument, Kraayenhof is an Innovator.

Besides the tango Nuevo he spread his wings to classic, pop and movie soundtracks. He played solo worldwide with the Estonian conductor Kristjan Järvi, he starred in the music of Marco Borsato and he worked with Ennio Morricone. And since Kraayenhof’s performance during the Royal wedding of Willem-Alexander and Máxima the abbreviation BN now also stands for BandoNeon.

We meet in the catacombs of the Amsterdam Music Theatre, where the National Ballet with the show “Gold” celebrates its fiftieth anniversary. Highlight in the show is the “Five Tangos” by Hans van Manen.

Kraayenhof: “His tango choreography in 1977 was a historic event for both the history of dance and the history of music. Van Manen made the works of Piazzolla known in new circles. This in 1983 led to Piazzolla’s Dutch debut in Vredenburg. The Management initially awarded granted Piazzolla the small room, but even two sold-out large rooms were not enough. There the tango revival of the eighties started.

For Kraayenhof that time symbolizes an extremely fertile period. He swapped study philosophy and harmonica for the bandoneon, which he managed to get through an Argentinean exile. “He also brought me albums of Pugliese and Piazzolla. I played their records, they were my first teachers. Then I studied in Paris and Mossalini taught me all about attitude and technique.”

While in the world of pop music in the eighties oriented to hip-hop and house, other musicloves discovered tango. Kraayenhof: “Thanks to Van Manen there was interest in the tango nuevo. This took more and more tango orchestras here, such as the renewed Sexteto Major Paradiso. At the same time arose many tango dance schools and festivals. Remember, many Dutch traveled to Buenos Aires for there to steal the secrets. So there was a thriving tango culture here which also coincided with the rediscovery of flamenco and salsa. ”

How did the contact with Piazzolla commence?
“In April 1987 his manager called: if I wanted to come to Amsterdam. Piazzolla wanted to borrow my instrument, his bandoneon was broken. He thought it was special that a Dutch man played bandoneon.” Play something for me, “he said. He grabbed my hand and said, “You’ve been in Buenos Aires, haven’t you guy. I’ll invite you over.” Six months later i was called by Piazzolla from New York: “I have three months work for you.” Eight performances a week on Broadway! ”

And Van Manen?
“To my surprise,” Five Tangos, “was danced to on a scratched old vinyl record. As all the other ballets live were accompanied by Holland Symphonia, I asked Van Manen to do just that with Piazzolla’s tangos.” Let’s see what you can do, “was his response. We accompanied the ballet, but Hans was only concerned about the dancers. Still, he said, “You can start straight away.”

Besides the support of The National Ballet this fall, you’ll also tour with your production ‘Pure’. Why that name?
“For two reasons. The title refers to a totally acoustic performance, a septet with four strings. At the same time it’s a twist to the political, the cultural situation today, where so few make room for the real music. This is the year the princess Maxima Orange Fund has announced that their goal is children should be more in contact with music. ”

Have you been asked to 02/02/12?
Kraayenhof: “No, not yet. 02/02/02 brought me national notoriety. The result is that people will suddenly find you commercially, or arrogant. Because you’re no longer part of the crowd. I choose carefully how and when I perform ‘Adios Nonino. If people really want to hear it, we play it. But there are occasions when we think “not now”. Usually we get the comment: “why didn’t you perform “Adios Nonino? ”