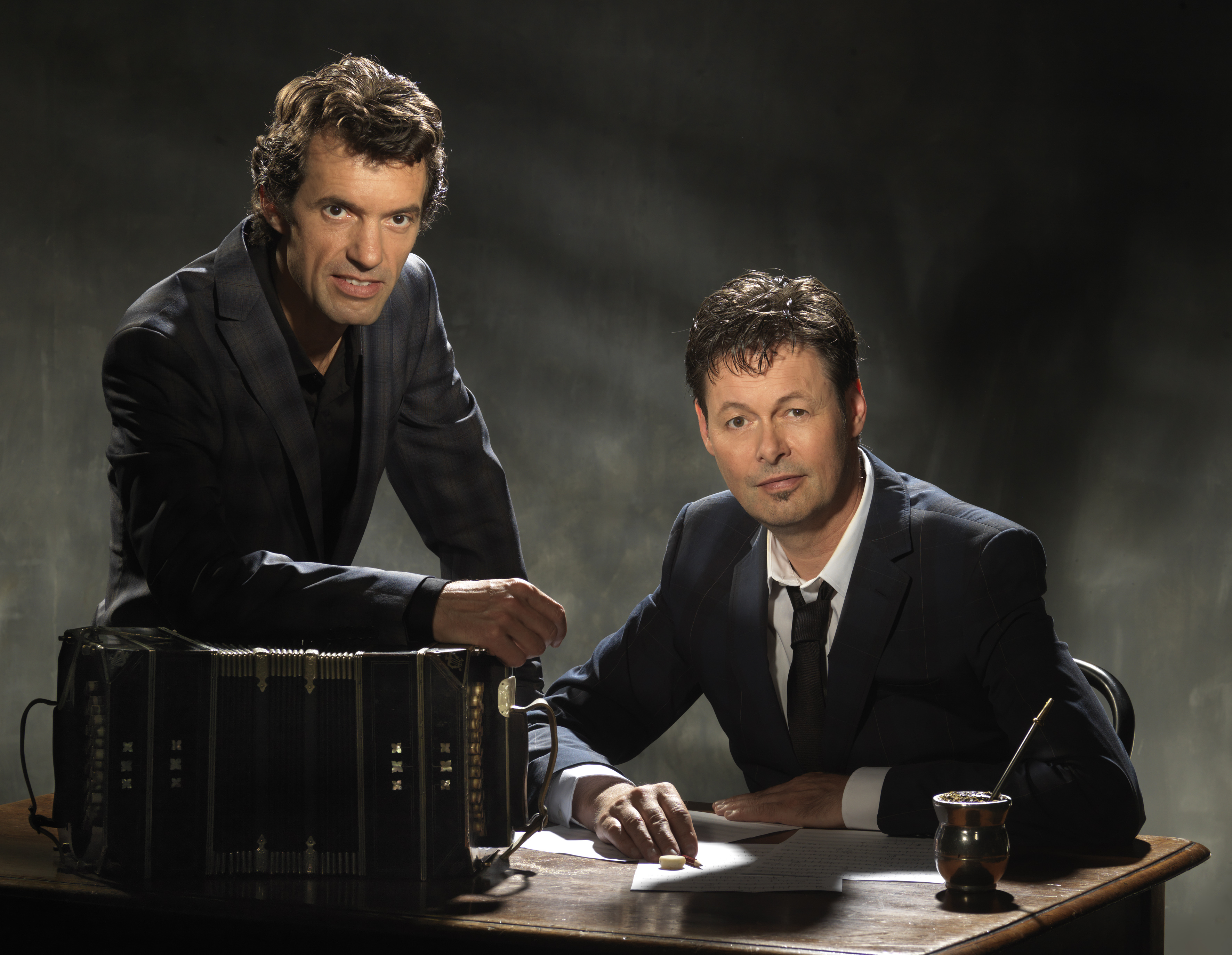 Carel Kraayenhof has had a turbulent year: a spring- and fall tour with his theatre show “Compassion”, guest shows with many national and international orchestras and artists (including Sting), solo shows and of course shows with his world famous Sexteto Canyengue.

On a regular basis he participated in television and radio shows with his Sextet, sometimes together with the Argentinean singer Omar Mollo and he also showed his commitment concerning the cultural cuts by the government. Furthermore the Sextet and Sebastiaan van Delft took different roads, and he has been replaced by Juan Pablo Dobal from Argentina.

This year he will also hit the theatres as a duo with the new pianist Juan Pablo.

What can we expect of it?

Juan Pablo really is a pianist virtuoso. I’ve known him since he moved to the Netherlands in 1989. At that time we played together in a quartet (Viento Del Sur: Piano, contrabass, bandoneon, guitar, bombo and vocals). In the past 20 years I think I’ve asked three times him to join the sextet (laughs). But he had other plans at that time. Now it’s a joyful moment for me that he finally said: “yes” the last time I asked him to join the sextet.

That means that he’s going to be playing in all groups. Therefore he’s part of the quintet (with André van Berlo on guitar), what actually is Sexteto Canyengue but the quintet has a guitar instead of a second bandoneon. He’s also part of the septet, the string quartet (KTE, Kraayenhof Tango Ensemble) and the duo of course. And that’s what we’ve just started with. We’re mostly rehearsing for the duo, which is so much fun.

And how do these rehearsals work?

Well, naturally the shape of the duo is different from a sextet. Basically you have two soloists. The piano and bandoneon are instruments which can fill in both leading parts and soloist-parts. They’re also instruments that you can plan chords on, so there are a lot of possibilities. We prepare ourselves individually. I have a couple of pieces, a few arrangements for bandoneon and piano. I simply send him the sheet music and the recordings. We both have our own composition. And then we rehearse together, sometimes we divide some lines, sometimes we smoothen the material, but most of it is clear.

But this is really the beginning of a duo, you see? It’s a really nice and casual repertoire that you can play. Eventually we’ll develop pieces together. At the same time this duo could lead to ideas for new material for the sextet of the septet. Then I will ask bass player Jaap Branderhorst to finish the rhythmic base of the piece with me and Juan Pablo Dobal, before we bring in the sting section. That’s very efficient; you just have to fill it in.

I believe that the collaboration with Juan Pablo is going to be fascinating.

Yes, he really is a pure-bred musician, which is magnificent. He’s all-round, in his work and he is very creative. He’s also a great improviser, he knows his ways. When we work together, we don’t need much time. Once he said to me: “You don’t have to write the piano part for me, just write your bandoneon part and I’ll play my way around it.” (Laughs)

Of course I arrange pieces for the two of us, specifically how I see the role of the piano but it’s both possible. That’s very pleasant. And last but not least, it’s great to have an Argentinean in the ensemble!  Because it truly makes a difference when you play Argentinean music. Not only for us but also for the audience. When there were only Dutch musicians in the ensemble I’d never speak Spanish, and that in my opinion is a pity. See, when you’re having a conversation with an Argentinean, in Spanish, it is intuitionally different, than when you talk to a Dutch person about music, in Dutch. It’s just like eating pasta in an Italian restaurant or eating traditional Dutch food in a Dutch restaurant, that’s totally different. You can express yourself in a different language but the feeling you have about music is defined different.

So the Spanish language during rehearsals really moves you?

Absolutely, for the past 20 years my world concerning music has been in Spanish language. Because I worked with Piazolla, Pugliese, and many other musicians from those ensembles: Colour Tango, Sexteto Mayor Etcetera. My sources are still the Argentineans of that time. I didn’t learn from Dutch people, but I have learned from Argentineans. That’s a big difference.

I understand you have worked a lot with Omar Mollo in the meantime?

Well, that is really nice. I Skype a lot with him, thanks to Skype we can now make musical appointments with each other. So it’s very special when he shows me the street he lives in through webcam and Skype! I can almost smell what he smells and I can almost feel the heat of the sun. Fascinating what Skype can do for you. He has the same thing with “the Beemster” because he’s our guest when we work together.

Carel Kraayenhof (1958), bandoneonist, composer and arranger, is the most fascinating and versatile bandoneon player of this time. Unique in his style as a result of his great knowledge of the Argentinean tango, he moves every world-wide audience with his enchanting and intriguing way of playing. Due to his collaboration with Astor Piazzolla (†1992) in 1987 on the broadwayshow ‘Tango Apasionado’ and the personal bond he has had for many years with tangomaestro Osvaldo Pugliese (†1995) he turned out to be one of the most loved bandonoenists of this time.

One of his highlights was on 2-2-2002 at the wedding ceremony of H.R.H Prince Willem-Alexander en H.R.H Princes Máxima where he passionately played the sensitive ‘Adiós Nonino’ by Astor Piazzolla. Besides the work with his Sexteto Canyengue for the past 21 years, he also worked with maestros of the classical music including: Ennio Morricone, Yo-Yo-Ma, the violin soloists Janine Jansen, Joshua Bell and the Cellist Quirine Viersen. He is an internationally respected bandoneonsoloist at various international symphonic orchestras such as the London Symphony Orchestra, Berliner Philharmoniker, Orchestre National de Lyon, Tonkünstler Orchestra (Vienna), Hong Kong Philharmonic Orchestra, Cincinnati Symphony Orchestra, Sidney Symphony Orchestra, London Philharmonic Orchestra with STING and many others

That Carel does not limit himself to one single style of music is proven by his work together with singers Dulce Pontes and Sting. In the Netherlands he has recorded songs with for example André Hazes (Bloed, zweet en tranen), Blᴓf (Barcelona, Bougainville, Geen Tango), Trijntje Oosterhuis (Nu dat jij er bent), Dana Winner (Afscheid van een Vriend), Guus Meeuwis and he performed with Marco Borsato.

Carel has received many awards, such as the ‘Edison Publieksprijs’ in 2003 for his CD ‘Tango Royal’ and in 2005 he was awarded by the Argentinean Government for his inexhaustible worldwide efforts for the Argentinean tango.

Juan Pablo Dobal (Argentina, 1964) received his first diploma in 1981 at ‘Conservatorio de Música de Buenos Aires Alberto Williams’.  There he was schooled by his first teacher Blanca Barquín, who was a dedicated student of the founder Alberto Williams. She passed his music on to Juan Pablo. In 1986 he received his second diploma at ‘Conservatorio Nacional de Música’. Furthermore Dobal has followed piano studies with Antonio De Raco and other masters of the classic and popular/improvised music.

Ever since he’s 25 he also plays in the Netherlands. Before, he was in the Theatres with his soloist shows ‘Argentinean wings’ and ‘Buenos Aires Piano Bar’. In 2010 Juan Pablo became permanent pianist of the other tango formations by Carel Kraayenhof: Sexteto Canyengue and Kraayenhof Tango Ensemble.