And sometimes all comes together!
The summer vacation period is here and many of you leave for distant places. For others, the sun shines especially here in the Netherlands.
In the past month, Carel has recorded two beautiful tracks with two special Dutch singers. For the new CD of Trijntje Oosterhuis he played together with Uruguayan guitarist Leonardo Amuedo on a moving song, ‘Eenzaam zonder jou’; and together the Volendammer Jan Smit he recorded a happy danceable hit, ’De Wereld Rond’. Both CDs will be released in early September.

And then we were just out of luck…
The repertoire was rehearsed, the sound engineers and the catering were ready, all the musicians were in top condition and then, the bandoneon’s tuning (442hz) just wasn’t there. At the beginning of July we would have recorded Carel Kraayenhof Ensemble’s new CD, ’30!’ if the bandoneon’s tuning was up to the job. Due to circumstances, Carel’s regular tuner didn’t manage to get this done in time. As a result, the recordings have been postponed until after the summer holiday.
The release for this CD is now scheduled for early February 2018. 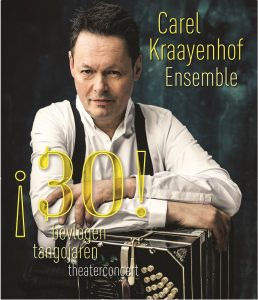 The complete concert agenda for the coming season is on our website. Take some time this summer to take a look at this extensive list.
Of course you have April 8, 2018 already in your agenda, that is the premiere of our new theater concert ’30! bevlogen tangojaren’ (passionate tango years) at the Philharmonie in Haarlem. In addition to our concerts with DUO, CKE and Lavinia Meijer, there are three special projects that we want to highlight:
1. In early September we will accompany the National Ballet of The Netherlands for the third time, on a program which will include choreographies of, the now eighty-five-year-old, Hans van Manen. During this project, we will guide the section ‘5 Tango’s’ (20 min.) and the Sexteto Canyengue will be complemented by percussionist Frank Wardenier and guitarist Elliot Muusses.
2. In early December, Carel will give a workshop ‘Argentinian Tango’ together with Bert, Jaap and Juan Pablo to the chamber ensemble of Het Gelders Orkest. After that Carel and Juan Pablo will perform three concerts with this ensemble.
3. In early January, Carel and Juan Pablo will give three New Year’s concerts with Het Zeeuws Orkest.

We are going to take it easy between August 1st and August 15th. We wish you happy summer weeks.