Review CD: Hotel Victoria
By: Pablo Rego www.musicasdelmundo.com
TANGO AND MUCH MORE IN A BALANCED MIX OF TECHNIQUE, TALENT AND CULTURES
Once you hold in your hands a CD called ‘Hotel Victoria’ (the title of a classic tango) where the Dutch headliner Carel Kraayenhof plays the bandoneón and the Argentinean Juan Pablo Dobal is on the piano, you can already imagine how full the box of surprises, which is this CD, is. The content consists of cohesive mix of own original compositions next to some classic tangos waltzes and songs inspired by Argentinean folk music. All of a very high interpretational quality.
While Carel Kraayenhof is a very talented and well known bandoneón player who has his roots in the tango music (a genre in which he has years of experience traveling the world with his Sexteto Canyengue, his Ensemble and as soloist), the collaboration with the versatile and exquisite piano player Juan Pablo Dobal creates an unique channel of expression that strengthens both musicians. 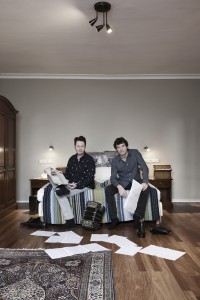 Hotel Victoria portrays the essence of an era, with sounds which were perfectly chosen to express this geographical pictures of moments in time from the tango and the folk music. This all well refined by an intellectual process and thereafter translated into an inexplicable synergy of technique and talent.
Throughout the entire CD, with its 16 songs, you can enjoy classic tangos such as ‘Adiós Nonino’, in a solo version from Carel Kraayenhof, ‘Hotel Victoria’ from Feliciano Latasa or a creole waltz from Julio César Sanders ‘Luna de Arrabal’. The tango structure and its traditions are merely the general guideline for the journey through the Argentinean folk music represented in the album; such as the vidala chayera ‘Vamos a chayar’, from Atuto Mercau Soria (a huge cultural rescue operation), the chacareras ‘La equívoca’, from Ariel Ramirez and ‘La carbonera’, from the Avalos Brothers. In additional to that, a generous gift in the shape of own compositions from Kraayenhof and Dobal, which were inspired by Argentinean genres, illustrating the local “music map” of the country; also presenting small pieces of history and multicultural characteristics – that not only from Argentina but from all around the world.
Our attention also goes to the arrangements of the songs, where both musicians made optimal use of the piano and the bandoneón. This based on their vast knowledge of the music they play and the range of possibilities these instruments can offer.
The Dutch Kraayenhof dares to infiltrate himself into a culture of a place of the world where he is obviously passionate about. Using the bandoneón and the tango as a home base, he dives into other genres that you will come across during the journey you will follow from the suburbs of Buenos Aires throughout the South American continent. The inspiration from the Argentinean Dobal and his knowledge of the music of his country, classic and jazz, give a new color to the sounds of his nation, keeping the same emotion.
‘Hotel Victoria’ is a piece of work to be enjoyed, to be discovered, a rich initiative with the piano and the bandoneón as headliners and instrumental sounds of great technical and interpretational qualities.